By Unknown - February 12, 2016
At every stop along the way, Pazos has generally seen a lot of success. He’s been able to fly through the system ranks and was even able to appear in 11 major league games in 2015. We’re still not totally sure about what his usage with the team will be. Could he be the primary guy against left-handed batters? Could he be a multiple inning reliever? Is he even going to make the 25-man roster out of spring training? Even though he comes in as our 20th prospect, he could potentially play the biggest role amongst all Yankees prospects this season. 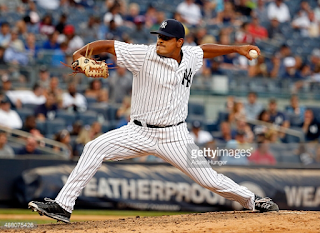 
Breakdown
From 2013-to-2015, Pazos went from low Single-A to the majors. In Double-A during the 2014 season, he pitched in 28 games and had a 1.50 ERA. He remained with the Trenton in Double-A for six games before moving on up to Triple-A. He dominated Triple-A hitters to the noise of a 1.09 ERA and a 1.21 WHIP in 33 innings pitched. Pazos’ one issue at every level has been his inability to throw strikes. He had a career 3.32 BB/9 (Walks per nine innings pitched) in the minor leagues and it didn’t get much better in his short 11 game major league stint with the MLB team as he walked 5.40 per nine innings.

Breaking down 2015, his Triple-A more specifically, he was dominant against lefties. In 47 plate-appearances against him, opposing batters could only manage a .179 batting average against him. He only allowed seven hits in the aforementioned 47 plate-appearances. He performed well against righties, as well. We’re not sure if he’ll get the chance against many RHH in the pros, but he proved during his days in the minors he can.

Moving up the majors, his small sample size of innings saw him perform better against RHH. He didn’t allow a single hit in the eight batters he faced. Lefties hit .273 against Pazos. Both are extremely small sample sizes.

Projection
Generally teams carry 12 pitchers, seven being relievers. Three of those spots are very obviously going to be taken up by Aroldis Chapman, Andrew Miller and Dellin Betances. Its likely Chasen Shreve is given the fourth spot based on the first-half of last season. The fifth, sixth and seventh spots are tricky. Seeing how I’ve already named three left-handed relievers, it’s likely they won’t use more than four. That means either Pazos or Jacob Lindgren will likely be battling in spring training for ownership to a bullpen spot. If Pazos does make the team over Lindgren, my guess is he’ll likely start off as the team’s lefty-specialist. He has great stuff, he just needs to throw more strikes. If he can’t, he’ll likely have to wait until an injury until getting another crack in the bigs.

You can view his minor and major league stats here.
You can keep up with our full top 30 list with links to our breakdowns HERE.