By Unknown - February 09, 2016
When Cessa first came over to America, at age 17, he spent his time as a position player, playing second and third base. After two unsuccessful seasons at the dish, somebody along the way realized Cessa had a good enough arm to pitch. 2016 will be the first season with the New York Yankees organization, hopefully registering some big league innings. 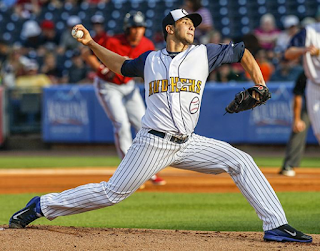 Photo via bcsn.tv
Breakdown
As I previously mentioned, Cessa started his career a position player. In 2009, his first season in professional baseball, he hit .191. It didn’t get any better in year two, it actually got worse, as he posted an atrocious .162 batting average. You normally don’t stick around too often as a position player hitting that poorly. Especially when he hadn’t even reached low Single-A yet!

Then 2011 came around, and the Mets organization saw something in Cessa – as a pitcher. In his first professional season as a pitcher, Cessa had success, and both parties knew which aspect of the game he would have the best chance at playing in the MLB was. The 2012 season was arguably his best season to date. In low Single-A, Cessa started 13 games and pitched to a 2.49 ERA. Not only was his ERA low, but his WHIP (Walks plus hits per innings pitched) was an astonishing 1.065. According to this fangraphs article that will help you get a better understanding about WHIP, anything under a 1.100 WHIP is “great.”

But since his 2012 season, things have gotten quite rocky for Cessa, something he became all too familiar with as a position player. He had a very promising time with the Mets Double-A affiliate but as soon as he reached Triple-A things went south, and not just because he was traded from New York. He didn’t pitch well and was then traded to the Tigers as part of the Yoenis Cespedes trade. After not performing well in the seven starts he made with the Toledo Mud Hens – The Tigers Triple-A affiliate – Cessa was traded involved in another trade, this time to the New York Yankees for Justin Wilson.

As 2016 opens up, Cessa opens up as the Bombers 23rd ranked prospect in the organization. The one consistent characteristic Cessa has been able to show everyone during his time as a pitcher is his uncanny control of his pitches. He hasn’t walked more than 36 people during a season, clearly showing how much of a strike-thrower he is. There is a big downside to that, and its clear Cessa has suffered from it. If you’re not throwing in the upper-90’s, you have to be willing to expand the strike-zone as often as you can. It’ll increase your walk total a bit, but you’ll allow less hits and likely strike more batters out. If he works on that during the offseason, his future will be in better shape.

Projection
Since becoming a pitcher, Cessa has been used exclusively as a starter. Cessa is currently a member of the Yankees 40-man roster, so there is a good chance we could see him at some point this season. He’ll likely be with the team in spring training and start the season in Triple-A. From there, it’s on Cessa. If he pitches like he did in 2012, he could be the first pitcher up from the minors. If he pitches like he has since then, we might not see him in pinstripes at all. I truly believe Cessa will make it to the MLB at some point during the dog days of the summer.

You can view his minor league stats as a pitcher and a hitter here.

You can keep up with our full top 30 list with links to our breakdowns HERE.