By NYY v BOS - February 25, 2016
So what we've been saying here at Bronx Bomber Blog is now official: Mark Teixeira wants to be a Yankee for life. Now I can already hear the mindless droning of irrational fans crying out "he's a walking DL trip" or "Greg Bird is the future!"

If you think his shattered shin as the result of a freak foul tip is something preventable or chronic, I can't give you all the help you need in this article. And I certainly do hope Greg Bird can be a part of the future but, with his season ending injury, his already uncertain guarantee of sustained big league success just grew more unsure.

But even if Bird returns and has success like we all wish, both he and Teixeira can still coexist. That's the beauty of the DH. 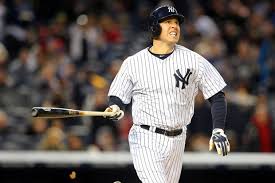 Via SportsWorldReport
Teixeira states he wishes to play another four or five years. Now I'm a pretty big Teixeira fan, but I'm not sure even I would hand him a four year deal. However, let's say the Yankees offer him a 3yr/$36mil extension (you can roll your own numbers out there as well, this one is hard to gauge). I'd say that's fairly reasonable and if Teixeira is sincere in his desire to return to the Bronx I think he would settle for a pay cut like this, but it is still a good chunk of change.

So how exactly would Mark Teixeira returning to the Yankees after this year work? As I previously alluded to, the DH is a big part of the answer.

Let's assume that Greg Bird recovers just fine and is one the big league roster come starting day next year. It makes a good bit of sense to let Bird and Teixeira split time between first base. For Bird, it makes sense to ease him into big league action, especially coming off a season ending injury, rather than just throwing him into the fire of a full major league season. And for Teixeira he gets some much needed rest to hopefully prevent any injuries and keep him fresh.

Now since I mentioned the DH earlier, you're probably wondering what about Arod? A fair question, but it's important to remember that come this time next year Alex Rodriguez will be 41. He had a great bounce back year this year, but I have a hard time imagining he will be anywhere near that effective two years from this past season. As a result, I also propose that Arod and Teixeira could also split duties at DH to keep both extra fresh. Theoretically on days where Greg Bird starts at first, you could also get Teixeira in the lineup by plugging him in at DH.

And this is the trend that would be the focus of the next two years a proposed three year extension for Teixeira. Once Arod's contract (finally) expires after the 2017 season, Teixeira can transition into the full time DH while Bird transitions into the full time first baseman. Each will have had some experience at these positions from the year before, so it shouldn't be too rough a change.

So you can have the bright, young future of Bird playing alongside the already impressive career or Teixeira.

Now this entire argument is predicated on the fact that Teixeira has done nothing but hit when healthy. In fact, every year he's played at least 111 games he's hit at least 22 home runs. Last year he hit an outstanding 31 round rippers in just 111 games. Had he played 150 or so games, he was on pace for 41 home runs. Not only that, but his batting average returned to respectability last season as he was hitting a .255 clip before ultimately being sidelined for the season after a fluke foul tip off the shin. Combined with the fact he averages 116 RBIs every 162 games, you'd be hard pressed to find a better DH candidate.

Not having to play the field every day would help Teixeira stay fresh and he could be a legitimate threat to smack 30 homers a year from that slot. The Yankees haven't had a ton of stability at the DH position up until recently and Teixeira could change that.

He's also one of the best fielding first basemen in the game and would make for a great back up when Greg Bird needs a day off from the field. He saved the Yankees countless errors this year and if not for the need to rest him and keep him fresh, you could argue that his defensive ability should keep him glued at first base.

The hard part of the equation is knowing whether the proposed 3yr/$36mil deal is realistic or not - for either side. Teixeira wants to return, so the assumption is that he would take a pay cut, but his healthy performance probably outweighs $12mil a year. And for the Yankees, they may gamble by going purely with Greg Bird and let Teixeira walk after the season.

But that would be a foolish risk on the part of the Yankees. Teixeira is simply too good of an insurance plan and as we've already outlined both he and Greg Bird can be a part of the franchise moving forward. I certainly would love to have the switch hitting slugger as my DH for future years. Time will tell though as spring training progresses and the regular season draws closer.