By Unknown - February 15, 2016
The forecast in New York City may call for cold rain and snow today, but baseball in the Bronx is heating up. This Friday, February 19th, Yankees pitchers and catchers will report to Tampa Bay, FL to begin spring training. With the 2016 season just around the corner, let’s countdown the top 10 things (in no particular order) Yankees fans have to look forward to this season. 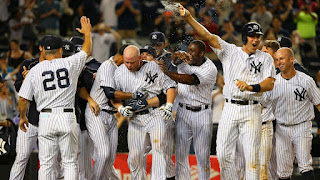 
10. Mark Teixeira’s milestones in potentially his final season in pinstripes
With Greg Bird waiting in the wings, 2016 may be the last time we see Teixeira as a Yankee. It should be a memorable season for the 1st basemen though, as assuming he can stay healthy, Tex will have the opportunity to reach two major milestones. The fan favorite currently has 394 homers and 392 doubles, and could reach the 400 club in both statistics come April or May. He will be racing teammate Carlos Beltran to 400 homers, as Beltran currently sits at 392. It’s sad to think his time in the Bronx is likely limited, and Yankees fans should enjoy watching Teixeira routinely take away base hits/save errors and launch “Tex-messages” while they can. Since joining the Yankees in 2009, Teixeira has hit .253 with 191 homeruns and 578 RBI’s — statistically making him one the best 1st basemen in Yankee history. The switch-hitter aims to finish his final season with the Yankees the same way he did in his first — hoisting the World Series trophy.

9. Playing in a winnable American League East
Every team in the division has their strengths and weaknesses, and I believe the Yankees, Red Sox, and Blue Jays all have the potential to win the AL East. There is no clear front-runner, and the Yankees have the opportunity to win the division for the first time since 2012. Check out my fellow BBB writer Matt Cote’s position-by-position breakdown of the division here.

8. Luis Severino’s first full season in the Bronx
Sevvy dazzled hitters last season as a rookie, as he pitched to a 2.89 ERA while striking out 56 in 62.1 innings of work. The Yankees desperately need Severino, Tanaka, or Pineda to step up and be the team’s ace, and my money is on Severino. After being called up amidst a pennant race last summer, the Dominican Republic-native never once looked intimidated or overwhelmed. Assuming he stays healthy, it is realistic for Yankees fans to expect 15 wins or 160+ K’s out of the righty.

7. The promising batch of young middle relievers
One of the most intense roster battles in Yankees spring training camp will be to see who will be bridging the gap from the starters to the back-end of the bullpen. This battle will most notably feature the likes of James Pazos, Bryan Mitchell, Chasen Shreve, Branden Pinder, Jacob Lindgren, Vicente Campos and Nick Goody. It is likely we will see all of these pitchers at some point this season, and hopefully a few will be able to establish themselves as reliable major league arms.

6. Starlin Castro’s 1st season in the pinstripes
It’s no secret that the production out of Yankees second basemen in 2015 was atrocious. Yankees 2B hit a combined .210 last season, but with Brian Cashman’s off-season acquisition of Castro from the Cubs, second base could now be a strong point for the Yankees. Coming off a hot second half in 2015, Castro will pair with Didi Gregorius up the middle for the bombers. After relying heavily on the long ball in 2015, the Yankees need players like Castro, Brett Gardner, and Jacoby Ellsbury to get on base and help the bombers create a more dynamic offense.

5. #42 to be retired by the Yankees… again!
#42 is retired by every team in baseball to honor all that the legendary Jackie Robinson did for the game, but this summer there will be another plaque for #42 in Monument Park. Former closer Mariano Rivera is as qualified as it gets to be enshrined along the greatest players in Yankees history, as his 652 saves are the most of all time. Thanks largely in part to his devastating cutter, Rivera led the Yankees to five World Series titles, and his 0.70 ERA (over 141 innings) and 42 saves in the postseason are playoff records. Rivera’s ceremony is set for August 14th before the Yankees square off against the Tampa Bay Rays.

4. Aaron Judge could make his MLB debut
In Baseball Prospectus’s recent list of the top 100 prospects in baseball, Judge landed at #18, rating him as the 5th best outfield prospect going into 2016. After mashing through various levels in the minors, the 6’7” slugger struggled to a .224 batting average with just 8 homeruns in 61 games at the AAA level to finish last season. Judge will likely return to Scranton to develop more before getting called up to the bigs, but if he produces in AAA, Yankees fans could very well see his Bronx debut in 2016. Due to his size and skill set, the righty has often drawn comparisons to the Marlin’s Giancarlo Stanton, and could be a strong reinforcement for the Yankees if injury sends Gardner, Ellsbury or Beltran to the disabled list… again.

3. Having potentially the best bullpen in the MLB
While a baseball game is 9-innings long, if the Yankees hold a lead after 6, the game might as well be over. With 2015 AL Reliever of the Year Andrew Miller and righty flamethrower Dellin Betances set to bridge the gap to newly acquired closer Aroldis Chapman, the backend of the Yankees bullpen looks lethal on paper. In 2015, Miller pitched to a 2.04 ERA and locked down 36 of 38 save opportunities. Miller’s set-up man Betances pitched to a 1.50 ERA, and struck out 131 — an MLB best among relievers — in 84 innings. While Miller and Betances shined in 2015, the Yankees other relievers often had trouble holding leads in the 6th and 7th.  With Chapman and his career 2.17 ERA now in the mix, the Yankees now only need to rely on their starters and middle relief to hold a lead through 6-innings.

2. Alex Rodriguez’s 700th home run and chance to pass Babe Ruth
Love him or hate him, A-Rod looks to have a historic 2016 coming his way. After sitting out the entire 2014 season, many people around baseball were unsure if we’d ever see another A-bomb, from A-Rod. After launching 33 knocks in 2015, the righty-slugger is just 13 shy of becoming the 4th player in MLB history to amass 700 homers. Rodriguez will need to hit 27 homeruns to tie Ruth and another to pass, but if he can put up similar numbers to his 2015 season, we very well could see A-Rod take sole-possession of 3rd place in the record books.

1. Yankees baseball is BACK!
Once the season heats up, it’s easy to get swept away in anger toward frustrating games or the performance of players/coaches. But with the season rapidly approaching, lets take a moment to enjoy knowing that the thing that has filled our summers as long as we can remember is back. Whether 2016 holds World Series title #28, or a frustrating .500-season for the Bombers, the offseason has taught us to enjoy every day that there is a Yankees game to be watched. And now that you’ve survived the darkest days of the year — let’s play ball!