Why the Yankees will win the AL East

By Unknown - February 12, 2016
As spring training approaches, I thought it would be a good idea to assess the state of our beloved Yankees. Similar to last season, the Bombers have a number of question marks going into 2016. If most things break right, I can see them winning 90 games or more, likely leading to a division title. On the other hand, if these same question marks aren't answered affirmatively, I envision this team winning between 80-85 games. This piece will be the first of two. Here, I will review what needs to go right in order for the Yankees to recapture the AL East title for the first time since 2012. Wow, I still can't believe it's been that long. The second, which I should write in a week or so, will detail the opposite scenario. While the Yankees do and should control their only destiny, whether or not they end up division champions will equally be determined by the performance of our division rivals, in particular the Boston Red Sox and Toronto Blue Jays. Even though I would love for everything to go smoothly, that will never be the case over the course of a 162 game season, so let's hope for the best, but prepare for the worst. 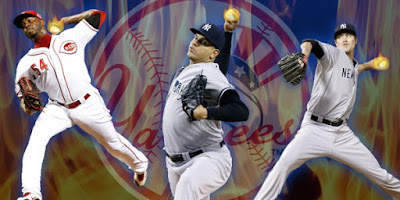 1. A healthy and consistent starting rotation

Once again, the Yankees biggest question mark going into spring training is the starting rotation. In my opinion, this group over performed last season, leaving room for some regression. Currently, we have six starters competing for five rotation spots, although these scenarios do have a tendency of working themselves out. In order to achieve consistency, the rotation must stay healthy.

The aforementioned goal starts and ends with our two most injury prone starters: Masahiro Tanaka and Michael Pineda. It's safe to say that ever since signing his big money contract, despite some initial success, Tanaka has been a disappointment. While he has displayed signs of dominance, he also gives up a lot of home runs. The latter is not a good for a pitcher who pitches most of his games at the homer-friendly Yankee Stadium. Putting aside the fact that Tanaka is a pitch away from undergoing Tommy John surgery, the Yankees need his performance to match his pay check. The head case that is Michael Pineda has encountered some of the same problems as Tanaka. He has struggled to stay healthy, however when he has been healthy, he's been extremely inconsistent. On any given start, he could either resemble an elite pitcher, or regress to Chris Capuano territory. Luis Severino and Nathan Eovaldi also need to take some steps forward. I'm confident Severino will continue to improve, however Eovaldi's numbers from last season can be misleading. He too, like Pineda, exhibited times of absolute dominance, however he also gave up A LOT of hits, and was helped immensely by offensive run support. I'm not expecting much out of C.C. Sabathia or Ivan Nova, therefore any production whatsoever that they can provide will be a welcome surprise.

In 2015, the Yankees lived and died by the long ball. As we so excruciatingly discovered, this was a losing strategy when faced with the likes of Dallas Keuchel. When Jacoby Ellsbury and Brett Gardner were setting the table during the early months of the season, our offense seemed unstoppable at times. It is imperative that both stay healthy, and perform to their paychecks, especially Ellsbury. Considering we had the worst offensive second baseman in the league for most of 2015, an improvement was desperately needed. In my opinion, the acquisition of Starlin Castro may turn out to be one of Brian Cashman's best moves during his tenure as GM. Castro instantly adds a level of versatility to a boring one-dimensional offense. With Castro, and Didi Gregorius up the middle, the Yankees have youth at two key positions. Don't get me wrong, the long ball has always been important to the Yankees philosophy so we shouldn't discount it by any stretch of the imagination, however the team will have to be able to manufacture runs. That being said, Alex Rodriguez, Mark Teixeira, Brian McCann, and Carlos Beltran need to maintain or exceed their 2015 levels of production. Similar to Sabathia and Nova on the starting pitching side, I don't expect much out of Chase Headley, so any positive contributions on his part will also be a welcome surprise.

We all know that the 7-8-9 innings are taken care of. Dellin Betances, Andrew Miller, and Aroldis Chapman should form the best late inning combination in major league history. That being said, I'm quite worried about getting the ball from a starting rotation that has struggled to give distance, to our elite relievers. With Adam Warren and Justin Wilson gone, this becomes much more difficult. Having at least two competent middle relievers would make me much more confident. Hopefully, this problem will be solved internally. Between Chasen Shreve, James Pazos, Jacob Lindgren, Nick Rumbelow, and Kirby Yates, maybe we can catch lightening in a bottle. This is one area where I would look to improve midseason if the aforementioned relievers struggle. While the Yankees grew complacent at last year's deadline, it is important they learn from their mistakes, and improve the team when necessary. Needless to say, I'm very excited about seeing many #SevenInningGames in 2016.

Throughout my time writing for this blog there is perhaps no man that I have been more critical of than Joe Girardi. Full disclosure, I am no fan of Mr. Girardi. Bearing that in mind, I am hoping he can improve upon his dismal performance last season. While I can argue about his managerial prowess all day, that is not my intended purpose. Like him or not, there were many moments last season in which Girardi left us fans scratching our heads. I've written about many of these quite extensively. In my estimation, his boneheaded moves cost the Yankees 10-15 wins, and that's a generous evaluation. I'm praying that Girardi throws away his binder and manages with his head. I can already see him switching and swapping Betances and Miller for lefty-righty match ups, although both are more than capable of getting out both. Amongst Girardi's most costly mistakes last season were his loyalty to mediocre players (Stephen Drew, Ivan Nova, etc...), resting players while they're hot, and his inability to manage a bullpen. Well, Mr. Girardi the onus is on you for improvement!

5. The rest of the division is not that good

The way I see it, the two teams that present the biggest competition to the Yankees within our division are the Boston Red Sox and Toronto Blue Jays. Although the Tampa Bay Rays have a tendency for developing tremendous starting pitching out of nowhere, I don't expect them to be a serious threat. The same applies to the Baltimore Orioles, who have really taken a step back in recent years, for an array of reasons, although I do expect Chris Davis to hit many home runs against us in 2016!

David Price's departure will be a huge loss for the Blue Jays to deal with, but they will also have a full season of Marcus Stroman so it may equal itself out. Toronto's offense was a force to be reckoned with last season, and with the heart of their lineup all back next season they will be a worthy opponent. I'm hoping some of these guys fall off, however I'm not too optimistic on that front. The Yankees MUST do something they failed to do in the second half of 2015, and that is beat the Toronto Blue Jays. I'm also very intrigued by the Red Sox. While the addition of Price surely helps them, the rest of their starters are rather mediocre. The addition of Craig Kimbrel to close out games will also be a huge asset. The Red Sox showed us in 2013 that they could make the transition from worst to first, so let's hope that will not be the case again.

In summation, I am much more confident heading into the 2016 season than I was in 2015. This cautious optimism though is equalized by the question marks surrounding the team. There's no debating that the Yankees offense and backend of the bullpen, at least on paper, are much better than what they ended the 2015 season with. The starting rotation is where my real worries are. If the Yankees can get something out of this bunch then I believe they will win the AL East. Unless another team within the division over performs, it should be ours for the taking!