Aroldis Chapman Suspended for Crime He Wasn't Even Charged With

By NYY v BOS - March 02, 2016
This week the MLB decided to hand out its first ever domestic violence suspension (30 games) to Yankee closer Aroldis Chapman, despite the fact he was never found guilty or even charged with domestic violence.

Before I continue I want to qualify this article by saying domestic violence is a heinous crime and I do not condone it or excuse it in the slightest. This is a rightfully touchy subject and needs to be tread upon carefully. However, it seems more than a little unfair that Major League Baseball chose to suspend Chapman for a crime that, in the eyes of the law, he did not commit. 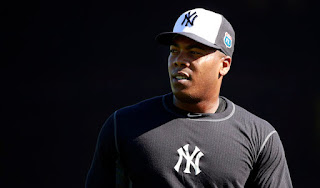 Via CBS Sports
By now we've all heard the details of the case that occurred on October 30, 2015. Police were called to Chapman's Miami home where Chapman's girlfriend claimed that he had choked her and that he had discharged nine rounds from a firearm in his garage.

If all this is true, then yes, Chapman deserves to be suspended without question. However, the authorities decided not to file charges, which is a pretty big deal.
In domestic violence cases, if the police suspect in the slightest that the crime has occurred, they have to make an arrest. It's not up to the victim to prosecute, the state makes the decision to by default. It speaks volumes that the police did not arrest Chapman that night. The amount of liability officers could face by not making an arrest when DV has occurred is outstanding, so once again, it says a lot that they felt comfortable in not making any arrests that night.

This is what disturbs me most about the Chapman suspension: the MLB is essentially saying it is sovereign and supreme to lawful authorities and I'm simply disgusted. I would be saying this even if Chapman wasn't on my team - even if he were on the Red Sox for crying out loud. The league simply can't say that its own investigations and findings are more conclusive than that of the men and women of law enforcement who respond to and investigate domestic violence incidents every day. That is simply asinine.

In a way this reminds me of the 'Deflate Gate' scandal in the NFL that took place a year ago. League commissioner Roger Goodell was desperate to make an example of Tom Brady and suspended him without all the evidence and facts. The result? That suspension was thrown out the window.

Clearly the MLB was eager to make an example of a domestic violence offender to show its fans it doesn't tolerate that kind of disgusting crime - and I'm all for that. However, it needed to be done to someone who was truly guilty (Jose Reyes anyone?).

Look, I can't say that Chapman is innocent. I wasn't there that night, so I simply don't know. He full well could be guilty as can be. But I don't know he's guilty and that's the issue here. Our nation was founded upon a criminal justice system wherein those charged were presumed innocent until proven guilty and Chapman has not been proven so. And he won't be, because once again, he wasn't even charged.

The real thorn in my side here is the fact that Chapman decided to accept the suspension even though he claims he's innocent. To some that may seem like an admission of guilt, but keep in mind that MLB was going to give him roughly 10 games more a suspension if he did appeal, which in itself is ludicrous.

I am not saying Aroldis Chapman is an angel, but the MLB simply overstepped its domain and rushed too many conclusions in this case. However, the league seems to be creating a history with giving unfair suspensions to Yankee players.

Remember a few years back when the MLB suspended Arod a full season despite the fact he never failed a test and other first time offenders were being given only 50 game suspensions? There's definitely something suspect about it all.

In the end, 30 games isn't the end of the world, but it's still unfair. Dellin Betances and Andrew Miller will hold the back end of games down as they did last year. The team should be just fine in Chapman's absence.

*Once again, this article has no intention of construing domestic violence as acceptable or a lighthearted subject. Any conclusions as such are simply inaccurate*