The Yankees, losers of seven of their last eight games, entered the final leg of this disappointing home stand looking to right to the ship against the Tampa Bay Rays. Having been incapable of hitting with RISP for this stretch, it was nice to see them make some incremental strides. The Rays entered the series at 7-8, tied for third place in the AL East, while the Yankees sit alone in last place at 5-9. Though Sabathia only lasted 4.2 innings, the Yankee bullpen locked down the Rays offense to help cement the win. The most exciting moment of the game came in the fifth inning when Jacoby Ellsbury stole home plate to tie the game at 3. 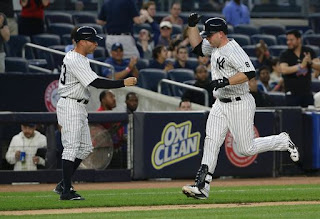 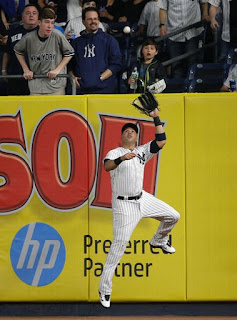 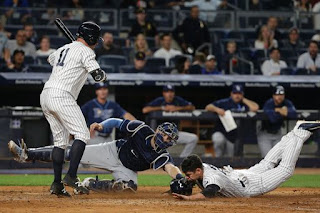 After Sabathia pitched a scoreless top half of the inning, the Yankees went down 1-2-3 against Moore.

With the bases loaded and two outs, Sabathia surrendered a two-run double to Logan Forsythe, giving the Rays a 2-0 lead. In the bottom half of the inning, Brian McCann blasted a two-run homer to right field to tie the game at two.

With runners on first and third and two outs, Sabathia worked himself out of the jam by striking out Steven Souza Jr. The Yankees had an uneventful bottom of the fourth.

Sabathia's struggle to mitigate his damages continued this inning. Brandon Guyer hit a two-out RBI single to drive in Forsythe from second, giving the Rays a 3-2 lead. The Yankees caught a break on Evan Longoria's subsequent double when the Rays third base coach held Guyer at third despite the throw coming into second. This mistake allowed Sabathia to escape further damage. The Yankees went down 1-2-3 in the bottom half of the inning.

With two outs and runners on first and second, Joe Girardi replaced Sabathia with Ivan Nova, who proceeded to work himself out of the inning without giving up any runs. The Yankees put together a nice two out rally in the bottom of the inning. With runners on first and second, Moore balked, allowing the runners to move up. Jacoby Ellsbury then impressively stole home plate, tying the game at 3!

Nova pitched a scoreless top of the sixth inning, getting Didi Gregorius off the hook for his sloppy error. With runners on first and second, A-Rod feebly popped out. Brian McCann then singled to left, driving in Beltran to make it 4-3 Yankees.

Uneventful inning for both teams.

Dellin Betances made the Rays look flat out silly at the plate while striking out the side in the top half of the inning. With runners on first and third and two outs, Ellsbury came through yet again, pounding a two run double to right to give the Yankees some insurance runs, and a 6-3 lead.

Miller came on for the save, and continued his dominance to lock this one up for the Yanks.

Tomorrow afternoon, the Yankees send Masahiro Tanaka to mound. He will face off against the Rays' top prospect, lefty Blake Snell, who will be making his major league debut. The Yankees hope to build off of this win, and finish off the home stand strong before embarking on a long road trip.