By Unknown - April 24, 2016
After yesterday’s dramatic walk off win, the Yankees were searching to ride the momentum for their first series sweep since August 2015. Michael Pineda took the mound for the Yankees and got off to a bad start early giving up a 5 spot in the first inning. It was a hit-or-miss afternoon for Big Mike as he surrendered 10 hits, 7 runs (4 home runs) while striking out 9 batters over his 5 innings of work. Tampa Bay countered with LHP Drew Smyly who was coming off back-to-back 11 strikeout performances still in search of his first win of the season. He overwhelmed Yankee hitters over his 7 innings of work surrendering only 1 run and striking out 6. 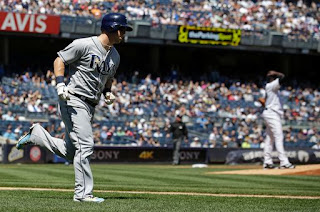 Picture Credit: Associated Press/Adam Hunger
Steve Pearce kept the inning alive with a single before Brad Miller doubled him in to give the Rays an early 3-0 lead. After a mound visit, Steven Souza hit the Rays' second home run of the inning, a two-run shot to left. 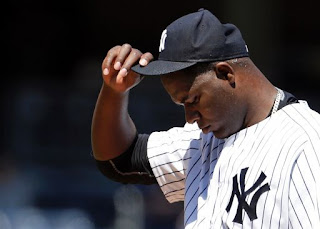 Picture Credit: Associated Press/Adam Hunger
Everyone in the Ray’s starting lineup came to the plate in the inning. Rays SP Drew Smyly sat the Yankees down quietly in the bottom half of the first. (Rays 5-0)

Second Inning:
Both Pineda and Smyly struck out the side in the second. (Rays 5-0)

Third Inning:
Steve Pearce led off the 3rd with the Rays’ third home run of the afternoon, a solo shot to left field. The Yankees were again retired in order. (Rays 6-0)

Fourth Inning:
Michael Pineda stranded two base runners and kept the Yankees deficit at 5.Yesterday’s hero Brett Gardner led off the bottom half of the inning with a HBP. After two quick outs Alex Rodriguez doubled home Gardner to put the Yankees on the board. (Rays 6-1)

Fifth Inning:
Pineda retired Steve Pearce and Brad Miller before Steven Souza Jr. crushed his 2nd home run of the afternoon, this time to the opposite field in right. Big Mike ended the top half of the inning by striking out Kevin Kiermaier for his 9th punch out of the game. Chase Headley drew a leadoff walk for the Yankees and Starlin Castro singled to left giving the Yankees an opportunity with RISP. Didi Gregorius flew out and both Ellsbury and Gardner grounded out to end the inning. (Rays 7-1)

Sixth Inning:
Kirby Yates came in to pitch for the Yankees and worked a scoreless inning. Mark Teixeira hit a one out single before A-Rod was lifted for pinch hitter Dustin Ackley who punched a single to right, his first hit of 2016. With runners on first and second, Brian McCann picked up the hat trick with his 3rd strike out of the afternoon and Chase Headley ended the inning with a fly out to center. Yet another #RISPfail. (Rays 7-1)

Seventh Inning:
Yates worked another clean frame for New York while striking out two for the second straight inning. In the bottom half of the inning Starlin Castro singled before Didi Gregorius grounded into a double play and Jacoby Ellsbury flew out to end the Yankee half of the seventh. (Rays 7-1)

Eighth Inning:
Nick Goody came in to pitch the 8th inning for the Yankees, his first appearance of the season. He was immediately greeted by Logan Forsythe who belted the Rays’ 5th home run of the afternoon. Goody finished the inning with 2 more strikeouts of his own, giving the Yankees 15 on the day. Steve Geltz relieved Drew Smyly in the 8th and worked a scoreless inning, sending the Yankees down in order. (Rays 8-1)

Ninth Inning: Neither team threatened in the 9th. The Yankees won the series, but lost today's game by a score of 8-1.

Looking Ahead:
The Yankees travel to Arlington to begin a 3-game series with the Texas Rangers. Nathan Eovaldi (0-2 6.11 ERA) will take the rubber for the Yankees. Cole Hamels was scheduled to get the nod for Texas but was scratched this morning because of a groin strain. Tomorrow’s starter is still TBD.