By Unknown - April 17, 2016
The Yankees came into today’s game looking to break out of the recent offensive slump that they have been in. They sent Masahiro Tanaka to the mound against Hishashi Iwakuma of the Seattle Mariners. Tanaka went in to the game still looking for his first win of the season. 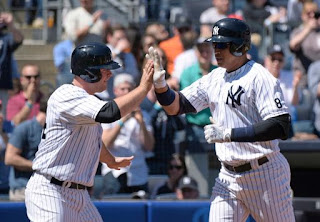 
1st Inning
Aoki grounded out to lead off the game, but he was followed by three straight singles by Seth Smith, Robinson Cano, and Nelson Cruz. Kyle Seager grounded into a fielder’s choice to score Smith, and Adam Lind struck out for the third out. The Mariners were up 1-0. Brett Gardner singled with one out in the bottom of the inning and stole second, but Beltran grounded out and Teixeira flew out to end the inning

2nd Inning
The Mariners went down in order. Brian McCann was hit by a pitch to lead off the bottom half, and Alex Rodriguez followed with a 2 run home run, his 2nd of the season to put the Yankees up 2-1. The Mariners got three straight outs after the home run.

3rd Inning
The Mariners went down in order.  Jacoby Ellsbury singled to lead off the bottom half and stole second, and advanced to third on a throwing error by the catcher, Steve Clevenger. Brett Gardner followed with a ground rule double to score Ellsbury and put the Yankees up 3-1. The Yankees couldn’t get anything else going.

4th Inning
Kyle Seager reached second on a fielding error by Mark Teixeira with one out followed by Adam Lind flying out to center, which moved Seager to third. Steve Clevenger then singled to score Seager and bring the Mariners within one run, making it 3-2. The Yankees went down in order.

5th Inning
Nori Aoki tripled with one out, then Seth Smith singled immediately after to score Aoki and tie the game up at 3. Then Cano grounded into a double play. Brett Gardner singled with one out, followed by a Carlos Beltran single, sending Gardner to third, who then scored on a wild pitch moving Beltran to second. The Yankees had the lead 4-3.

6th Inning
The Mariners went down in order. Starlin Castro doubled to lead off the inning but the Yankees were unable to get anything out of it.

7th Inning
The Mariners went down in order again. Mark Teixeira singled with 2 outs in the inning, and the Yankees were unable to get a run, keeping the score at 4-3.

9th Inning
Andrew Miller came in to close the game in the top of the inning. Andrew Miller struck out the side to finish the game and give the Yankees the win 4-3.