By Unknown - April 25, 2016
Unfortunately, the Yankees have been continually hit with injuries lately, whether it is with James Kaprielian, their top pitching prospect and #4 prospect in their system, or Alex Rodriguez, a seasoned veteran whose contributions last year (33 HR, 86 RBIs) were extremely important to the team. Below are some updates on injuries to major league players and key minor league players around the Yankees organization. This is only current as of Monday, April 25.


Alex Rodriguez (on the 25-man & 40-man roster): During the Yankees 8-1 loss to the Rays, A-Rod was taking practice swings in the cages before his sixth inning at-bat but then felt stiffness on his left oblique. He was replaced by Dustin Ackley. Although Girardi did not look optimistic in his post-game presser, his MRI on the oblique was negative, and he felt much better on Monday. He did not play in today’s (Monday, 4/25) win over the Rangers, but by his reports, it sounds like he will be back in the lineup by Wednesday or Friday. 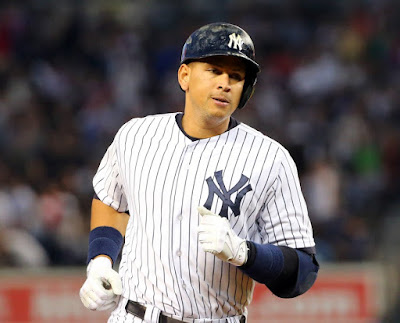 
Aaron Hicks (On the 25-man & 40-man roster): Hicks suffered a “traumatic bursitis” on Friday night when he dove for a fly ball in the game against the Tampa Bay Rays. He received a cortisone shot and his inflammation has improved, but according to Meredith Marakovits of the YES Network, he hasn’t done much other than stretches and mobility/movement exercises. He was not available at all in today’s (Monday, 4/25) game. Yankees manager Joe Girardi said they will not call up anyone to replace him, but that he will hopefully be back by the end of this week.

James Kaprielian (On the 15-day DL, not on the 40-man roster): Kaprielian started the year at High-A Tampa, and has dominated hitters, pitching to a 2-1 record with a 1.50 ERA in 18.0 innings, along with 22 strikeouts and holding opponents to a .136 batting average against him. Kaprielian was the first-round selection for the Yankees in 2015 and was rumored to be on the fast-track to the majors by September. However, an MRI today revealed elbow inflammation, but the Yankees are optimistic. They will put Kaprielian on a rest/throwing program, and will proceed cautiously. As a result, the chances of Kaprielian pitching in the majors this year has significantly decreased as they want to limit his innings and ensure his elbow does not suffer any more damage. 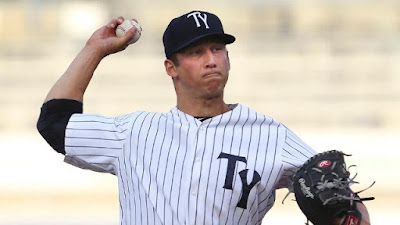 Picture Credit: MiLB.com
Branden Pinder (On the 15-day DL & 40-man roster): After being called up on April 16 from Triple-A Scranton and making a 1-inning appearance against the Oakland Athletics on April 20th, allowing two runs and three hits, he was placed on the 15-day disabled list and it was determined that he has a partial UCL tear. On Monday afternoon, Jared Diamond of The Wall Street Journal revealed that Pinder has elected to go down the Tommy John surgery route, and will undergo the surgery tomorrow. Pinder will be out for about a year.

Nick Rumbelow (On the 7-day DL currently, according to the Triple-A Scranton roster & 40-man roster): Unlike Pinder and unfortunately, Rumbelow had no option as his elbow ligament tear necessitated Tommy John surgery last week and he has already undergone the procedure. Rumbelow will be out for a year.

Jacob Lindgren (On the 15-day DL & 40-man roster): After undergoing elbow surgery in the offseason, Lindgren has started off the year poorly with nine walks in just seven innings at High-A Tampa. Lindgren was recently placed on the 15-day disabled list in the minors for another elbow issue. He made 7 appearances for the Yankees last season, pitching 7 innings, striking out 8, but ended up with a 5.14 ERA. 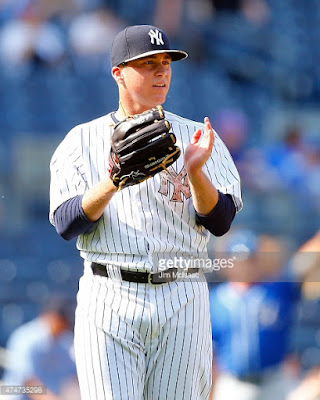 Picture Credit: Getty Images/Jim McIsaac
Slade Heathcott (On the 7-day DL & 40-man roster): However, Shane Hennigan, the Triple-A Scranton beat writer, said that Heathcott felt fine catching fly balls in the outfield before their game tonight. He was hit by a pitch on his hand on April 20 and suffered a contusion, but his X-rays came back negative so he is currently on the 7-day disabled list. 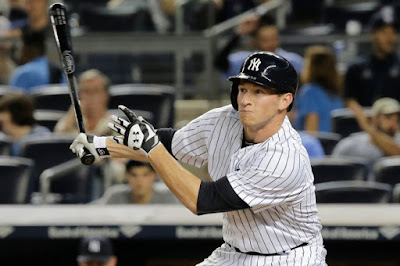