By Unknown - April 23, 2016
On a beautiful Saturday afternoon in the Bronx, the Yankees faced the Tampa Bay Rays for the middle game of a three game set. Masahiro Tanaka toed the rubber and had another solid outing as in seven innings the righty struck out seven and allowed only two runs. 23-year-old Blake Snell made his MLB debut and was impressive, striking out seven and allowing one run. 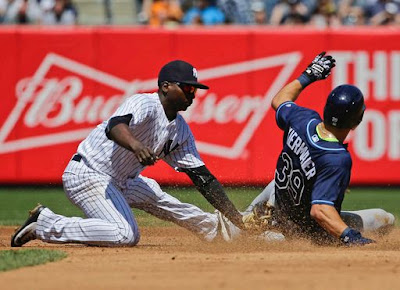 Tanaka looked sharp in the first, setting the Rays down in order. Carlos Beltran was walked and moved to third by a Mark Teixeira single. Beltran scored on a wild pitch and A-Rod missed a 2-run homer by a matter of inches. (Yankees 1-0)

Second Inning:
The Rays went down 1-2-3 in the 2nd. Snell rebounded nicely, striking out the side. (Yankees 1-0)

Third Inning:
The Yankees and Rays went down quietly in the 3rd. (Yankees 1-0)

Fourth Inning:
Corey Dickerson hit a 2-out double that scored Logan Morrison. Snell continued his fine work as he set the Yankees down 1-2-3. (Tied 1-1)

Fifth Inning:
Kevin Kiermaier smashed a solo homer off the right field foul pole to give the Rays the lead at 2-1. The Yankees couldn’t get anything going offensively. (Rays 2-1)

Sixth Inning:
Tanaka continued his solid outing into the 6th, quieting the Rays lineup. The Yankees wasted Brett Gardner’s leadoff single and could not score in the inning. (Rays 2-1)

Seventh Inning:
Masahiro Tanaka threw a beautiful 7th, setting the Rays down in order with 2 K’s. Brian McCann and Chase Headley drew walks while Jacoby Ellsbury got on from catcher’s interference. Brett Gardner then ripped a line drive single off of Xavier Cedeno’s glove that scored McCann. The Yankees left the bases loaded after Carlos Beltran grounded out. (Tied 2-2) 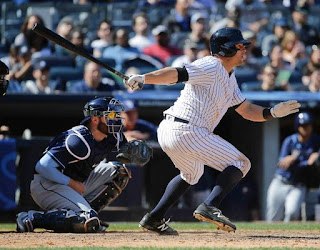 Photo Credit: Associated Press/Frank Franklin II
Eighth Inning:
Dellin Betances came out and tossed another gem, a 1-2-3 inning with two punchouts. Despite back-to-back two out singles from McCann and Starlin Castro, Chase Headley ended the inning with a groundout. (Tied 2-2)

Ninth Inning:
Andrew Miller tossed a scoreless top half of the 9th. In the bottom of the 9th, with two outs, nobody on, and the count at 3-1, Brett Gardner drilled the next pitch OVER THE RIGHT FIELD WALL & the Yankees WON 3-2!! What a great way to win.