By Unknown - April 06, 2016
The Yankees lost their season opener yesterday by a score of 5-3 to the Astros. Dallas Keuchel rallied after giving up a 2-run double to Starlin Castro to shut down the Yankees. The controversial call stemming from Carlos Correa’s grounder to Dellin Betances allowed the Astros to come from behind and win. Tonight, Michael Pineda (12-10, 4.37 ERA in 2015) faces off against Houston’s Collin McHugh (19-7, 3.89 ERA). In the 2015 season, McHugh allowed only three earned runs to the Yankees in 14.1 innings, with a 2-0 record in two starts. Pineda, meanwhile, allowed seven earned runs in 12.1 innings, giving up 13 hits and striking out 11. 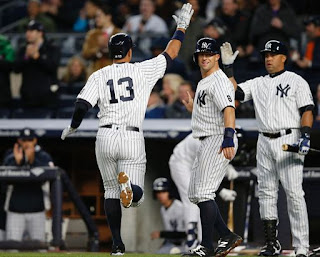 Wednesday, 4/6: Houston Astros 6 @ New York Yankees 16
1st Inning
This game did not lack offense from the start. Carlos Correa got the game started with his first home run of the game and his second of the year with a homer to left. Then, the Yankees started quickly with a catcher’s interference and two walks. Then, Mark Teixeira got the scoring with a RBI single, McCann followed with a 2-RBI double, Beltran’s groundout scored Teixeira, and Headley’s RBI single made it 5-1. Astros starter Collin McHugh was taken out and then Starlin Castro added a sixth run with a RBI single to center. The Yankees led 6-1 after one inning.
2nd Inning
The Astros did not give up. After Preston Tucker’s double put runners on second and third and Pineda hit  Altuve with a pitch, George Springer belted a grand slam to left to make it a 6-5 game with two outs. But the Yankees added more runs, as Starlin Castro hit his first home run as a Yankee with a 3-run shot to left to make it 9-5 after two innings.
3rd Inning
The Astros had Tyler White on second after a double, but Preston Tucker grounded out to end the top half of the third. Mark Teixeira joined the homer party with his own 3-run shot to right with one out to make it 12-5, with Gardner on first and Ellsbury on second.
4th Inning
Neither team threatened in this inning. The Astros went 3 up, 3 down, and the Yankees did not do much despite a Didi Gregorius single.

5th Inning
Carlos Correa continued his offensive dominance as he homered to deep center with his second home run of the day to make it a 12-6 Yankees lead. In the bottom of the fifth, Alex Rodriguez walked with one out but nothing came of it.
6th Inning
Ivan Nova, who lost the fifth rotation spot battle to CC Sabathia in Spring Training, entered for Pineda in the beginning of the sixth. With two outs, Altuve’s single put runners on first and second. However, Nova got Springer to ground out to end the inning. In the bottom half, Beltran hit his first home run of the year to left off of Houston’s new pitcher, Tony Sipp, to make it 13-6. Sipp then loaded the bases when Castro doubled, Didi Gregorius hit an infield single, and Gardner walked. Josh Fields entered with the bases loaded and Alex Rodriguez at the plate and two outs. However, Fields struck out A-Rod to end the inning.

7th Inning
Although Correa and Colby Rasmus led off with singles, Carlos Gomez grounded into a 5-3 double play to put Rasmus at second with two out. Nova then struck out Luis Valbuena to end the top half of the 7th. In the bottom half, Ronald Torreyes extended the lead to 15-6 with a 2-run triple to center in his first Yankees at-bat to score Aaron Hicks from first and Brian McCann from second. Castro then singled home Torreyes and continued his torrid start to the year, making it 16-6 at the end of seven innings.
8th Inning
Both the Astros and Yankees went down in order.
9th Inning
Ivan Nova completed his scoreless four-inning outing to give the Yankees the 16-6 win in a nearly four-hour game.
Player of the Game: Starlin Castro: 4-5, 5 RBIs, R