By Unknown - April 25, 2016
Over the weekend, the Yankees took two out of three games from the Tampa Bay Rays in Yankee Stadium. Today, the Yankees start a nine-game road trip, first with a three-game set in Arlington, Texas, against the Texas Rangers. The Rangers sent Cesar Ramos to the hill for a spot-start in replacement of Cole Hamels, who was pulled with a strained groin. Meanwhile, the Yankees sent Nathan Eovaldi to the mound for the first of these three games. The Yankees have improved with runners in scoring position, but players such as Chase Headley (although his defense has been much improved) have still struggled at the plate. Alex Rodriguez and Aaron Hicks both did not start due to an oblique and shoulder injury, respectively. However, Yankees manager Joe Girardi said there will not be a call-up as A-Rod is expected to return shortly and Hicks will return by the end of the week. 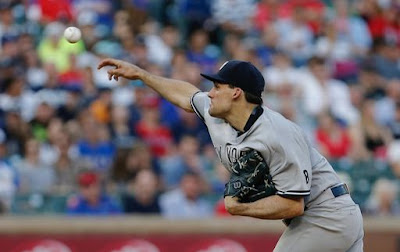 Winning Pitcher: Nathan Eovaldi (1-2, 4.38 ERA) - 7.0 IP, 2 H, 0 ER, 2 BB, 6 K
Losing Pitcher: Cesar Ramos (0-1, 4.50 ERA) - 6.0 IP, 9 H, 3 ER, 2 BB, 5 K
Save: Andrew Miller (5, 0.00 ERA)
1st Inning
Both teams went down in order in the first. Nathan Eovaldi and Cesar Ramos both looked good early. (Scoreless)
2nd Inning
After Dustin Ackley walked to load the bases, Didi Gregorius and Austin Romine both failed to get runners home as Gregorius grounded into a fielder’s choice at first, and Rangers 1B Prince Fielder threw out Mark Teixeira at home, and Romine grounded out back to Ramos. Didi Gregorius then made an error to start the bottom of the second, but Eovaldi recovered without issue. (Scoreless)
3rd Inning
Jacoby Ellsbury led off with a home run to right to give the Yankees a 1-0 lead. Then, after Carlos Beltran walked, Mark Teixeira’s double to deep center, to the right of Rangers CF Delino DeShields, Jr., scored Beltran all the way from first. The Rangers went down in order. (Yankees 2-0)
4th Inning
The Yankees had runners on first and second but Ellsbury grounded into a double play. Eovaldi walked Nomar Mazara but Eovaldi was able to avoid any further trouble. (Yankees 2-0)
5th Inning
Both teams went down in order. Eovaldi had not allowed a hit through 5 innings at this point. (Yankees 2-0)
6th Inning
Starlin Castro led off the 6th and homered to deep left center to extend the Yankees lead to 3-0. 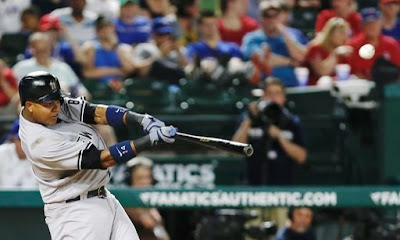 Photo Credit: Associated Press/Brandon Wade
The Rangers went down in order in the sixth, still without hits in the game. (Yankees 3-0)
7th Inning
Austin Romine and Jacoby Ellsbury put runners on first and second to start the inning, but after Phil Klein entered for Ramos, Gardner grounded into a fielder’s choice at second, and both Beltran and Teixeira struck out swinging. The Yankees once again failed to score with RISP. Nomar Mazara led off the inning, and with the shift in place (sigh), singled to left to break Eovaldi’s no-hitter. It was erased on a double play but Prince Fielder doubled to right with two outs, but Ian Desmond grounded out to shortstop to end the inning. (Yankees 3-0) 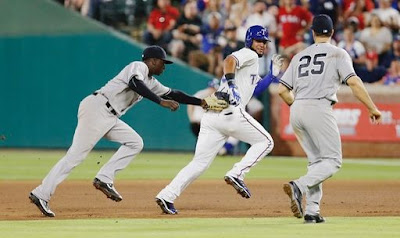 Photo Credit: Associated Press/Brandon Wade
8th Inning
No threat from the Yankees in top of the eighth. After walking the leadoff batter, Dellin Betances entered and induced an Elvis Andrus double play, but Brett Nicholas (his first career home run) homered to right to give Betances a non-0.00 ERA (0.90 ERA now) and to cut the Yankees lead to 3-1. 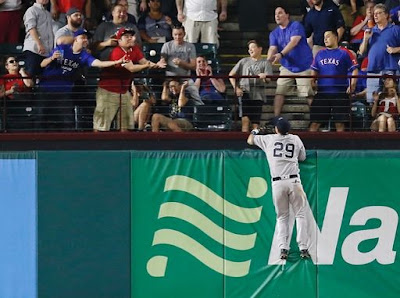 9th Inning
The Yankees did not threaten in the ninth. Andrew Miller entered to start the bottom of the ninth and set the Rangers down in order, and the Yankees won 3-1!