By Unknown - April 05, 2016
After being rained out yesterday, the New York Yankees (87-75 in 2015) finally started its 2016 campaign on a cold Tuesday afternoon against the Houston Astros (86-76 in 2015) in the Bronx. The Yankees sent Masahiro Tanaka (12-7, 3.51 ERA in 2015) to face Houston’s Dallas Keuchel (20-8, 2.48 ERA), in what was a rematch of last year’s Wild Card game. The Yankees lost 3-0 in the Wild Card game last year, where Keuchel threw six shutout innings, struck out seven, and allowed only three hits. The Yankees need a fantastic start to the season if the team wants to start the year off with momentum. Aaron Hicks started in left field over Brett Gardner in today’s season opener. 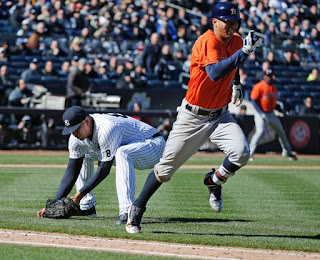 
Tuesday, 4/5: Houston Astros 5 @ New York Yankees 3
1st Inning
Not much in the first inning. Tanaka sent the Astros down in order; Keuchel got Alex Rodriguez to ground into a 4-3 double play after walking Aaron Hicks on four pitches.
2nd Inning
Tanaka retired the Astros in order. After Carlos Beltran singled and Brian McCann walked, Chase Headley’s grounder to Carlos Correa should have ended the inning. However, Correa bobbled it, and therefore, while Headley was out at first, Beltran and McCann advanced to third and second, respectively. Then, Starlin Castro came through (with RISP!!) with a line drive double to left and the Yankees led 2-0 after two innings.
3rd Inning
10 pitches for Tanaka, and another 3-up, 3-down inning. In the bottom half, with two outs, Carlos Beltran popped out to short with Rodriguez on second and Teixeira on first, who both reached via walks.
4th Inning
Jose Altuve’s line drive double sailed over Aaron Hicks’s head, who misplayed it, leading to the first Astros runner of the game. After a George Springer infield single, Carlos Correa’s hard grounder to Chase Headley at third led to a fielder’s choice and Altuve scoring to make it 2-1. With Springer on third and two outs, Tanaka struck out Carlos Gomez looking to end the top of the 4th. Castro grounded into a 5-4-3 double play to end the 4th inning. The Yankees led 2-1 after four innings.
5th Inning
Preston Tucker doubled on a line drive to right with one out. Tanaka then struck out Marwin Gonzalez and Jason Castro grounded out to Tanaka to end the top of the fifth with no damage. Keuchel retired the Yankees in order on nine pitches.
6th Inning
With two outs and none on, Carlos Correa hit a solo home run on a line drive to right to tie the game at 2. Chasen Shreve took over for Tanaka after 5.2 innings to lukewarm applause by Yankees fans. Shreve quickly ended the top of the sixth. The Yankees did not threaten in the bottom half.
7th Inning
Shreve worked through the Astros order without an issue in the seventh. Keuchel retired the Yankees in order and has retired the last eleven Yankees in a row. End 7th, tie game at 2.
8th Inning
Dellin Betances entered the game for Shreve at the start of the 8th. Betances starts his 2016 campaign with a walk to Altuve and Altuve promptly steals second with none out. With one out, Correa’s slow grounder to Betances led to an errant throw as Betances tried to throw over the running Correa, who was probably out of the base path. The throw over Teixeira’s head led to Altuve scoring and the Astros took the lead at 3-2. The Yankees decided to play the game under protest as manager Joe Girardi believed that Correa was running out of the base path. The Astros grew their lead to 5-2 with a Luis Valbuena 2-run double as Betances struggled with his command and some suspect calls from home plate umpire Dana DeMuth did not help. Ken Giles came in for the bottom of the 8th and Didi Gregorius promptly drilled a solo home-run to right to cut into the Astros lead and make it 5-3 Houston. The 8th ends with Houston leading 5-3.

9th Inning
Johnny Barbato recorded a clean 1-2-3 inning, striking out two batters. Luke Gregerson came in for the 9th inning and closed out the game for the Astros for a 5-3 Houston win in Game 1.