By Unknown - April 14, 2016
We’re now eight games into the season and it’s abundantly clear that the Yankees will live and die with their boom-or-bust offense, so to speak. The Yanks were only able to scrape up three hits against Blue Jays ace Marcus Stroman, while he limited New York to just two runs over eight innings.
Through the first three innings of the game, both Nathan Eovaldi and Marcus Stroman we’re cruising along. Once the fourth inning came along, the wheels didn’t completely fall off, but they definitely loosened for Marcus Stroman of the Jays. 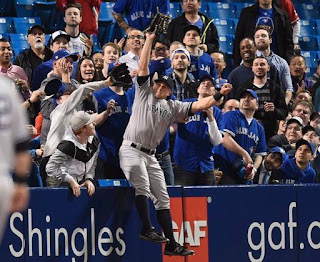 Photo Credit: Associated Press
Stroman hit Alex Rodriguez who moved to second on a base hit. They both advanced a base when the speedy Brian McCann was awarded an infield single on a questionable ruling but at any rate, it loaded the bases. Carlos Beltran drove in the first run grounding into a fielder’s choice and the following batter, Chase Headley, walked to reload the bases. Mark Teixeira, another speed demon, scored on a passed ball giving the Yanks a 2-0 lead which at the time, seemed like enough runs for Nathan Eovaldi who was dealing.

Revert back to that final line and note that I said “seemed like enough.” Well, I was wrong, because up came Josh Donaldson with two men on in the fifth inning and the 2015 MVP launched a ball that was headed straight for the moon. That gave the Blue Jays a 3-2 lead and Marcus Stroman never looked back.

The slumping Troy Tulowitzki gave Stroman all the insurance he needed in the sixth inning when he hit a solo shot to extend the lead to two runs. Stroman threw eight strong innings in which he only allowed two earned runs on three hits while striking out three. He also induced the Yanks lineup to groundout 17 times. Yes, 17. Your eyes did not deceive you.

On a positive note for Yankees pitching: we had a starter record an out in the seventh inning! I was beginning to worry whether or not we’d go 162 straight games of the rotation giving us no more than six innings! Two mistakes cost Eovaldi a potentially great start. He had filthy stuff from the first pitch, quite possibly the best stuff he’s had as a Yankee.

In all four of the Yankees losses this year, they’ve failed to score north of three runs. Right now if they don’t score, their pitching staff isn’t able to limit opposing lineups enough to get by. Earth to those making millions of dollars: do your jobs!