By Unknown - April 20, 2016
The Yankees lost Game 1 of this series last night by a score of 3-2 in 11 innings. Although Alex Rodriguez got the scoring started early with a RBI single in the first, he struggled the rest of the night, particularly in the later innings, and so did the Yankees offense. Although the bullpen was strong in its 5 innings of relief, one run is the difference between win and loss in extra innings, and Johnny Barbato, unfortunately, gave up his first earned run of the season and suffered his first loss of the season. Tonight, the Yankees look to rebound with Nathan Eovaldi (0-1, 6.94 ERA) on the hill, who faces Kendall Graveman (0-1, 2.38 ERA) of the Oakland Athletics. Once again, the Yankees must hit with RISP, as they went 1-for-7 on Tuesday night. 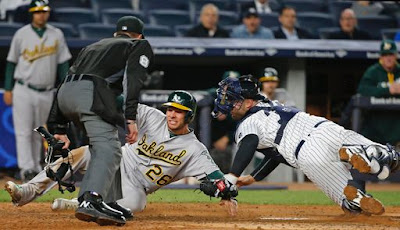 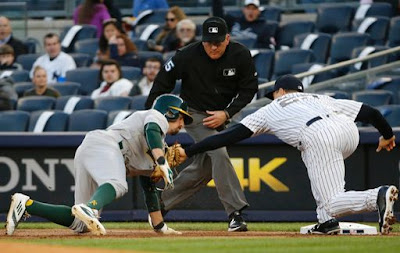 The Yankees put runners on first and second with none out and Alex Rodriguez eventually came up with the bases loaded and two out. However, he continued to struggle with RISP as he struck out looking.
2nd Inning
Eovaldi continued to do well as he set the Athletics down in order. Didi Gregorius put the Yankees on the board with a solo homer to right, and the Yankees led 1-0. 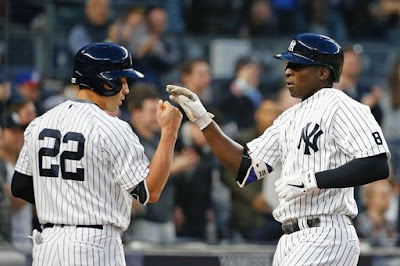 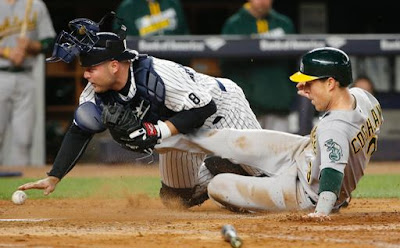 After Danny Valencia singled to put runners on the corners with none out, Stephen Vogt’s sacrifice fly made it 3-1. Fortunately, Eovaldi stopped the bleeding after Hicks threw out Danny Valencia at home, who tried to score on Yonder Alonso’s fly out. The Yankees didn't threaten in the bottom of the 4th. (Athletics 3-1)
5th Inning
Billy Burns continued his great game with a double with one out, but Josh Reddick was intentionally walked with two outs to bring Kendall Graveman, the Athletics starting pitcher, to the plate. Eovaldi struck out Graveman to end the top of the 5th. Graveman came up because the Athletics relinquished their DH when Jed Lowrie entered the game at second base. The Yankees went down in order in the 5th. (Athletics 3-1)
6th Inning
Eovaldi worked around Vogt’s leadoff double with two strikeouts and help from Mark Teixeira’s nice grab of Yonder Alonso’s sharp grounder at first. The Yankees went down in order in the 6th as well. (Athletics 3-1)
7th Inning
Kirby Yates entered the game to start the 7th and worked around a Chris Coghlan walk to finish the inning without issue. In the bottom of the half, Didi Gregorius’s double put runners on second and third with one out. However, disaster ensued. Aaron Hicks hit a groundball to third, Chris Coghlan tags out Didi Gregorius, who was running from second to third (or he was out because he ran out of the base path), and then Coghlan threw to first, and Hicks was out! A deflating inning-ending double play, and the Yankees failed again with RISP. (Athletics 3-1)
8th Inning
Branden Pinder entered the game for the Yankees to begin the 8th. The Athletics loaded the bases quickly and then with none out still, Khris Davis singled to center, with the infield in, and two runs scored to make it 5-1. In the bottom of the 8th, Carlos Beltran homered to right to make it a 5-2 game.
9th Inning
Ivan Nova entered to start the 9th and set the Athletics down in order. Sean Doolittle, who pitched last night, entered in the bottom of the 9th and closed out the game to earn the save.