By Unknown - April 26, 2016
Backed by last night’s terrific outing by Nathan Eovaldi, the Yankees won the opening game of a 3-game series against the Texas Rangers in Arlington, Texas, by a score of 3-1. After Eovaldi pitched seven strong innings, the best we’ve seen in him in a long time, Dellin Betances and Andrew Miller came in for an inning each to close the game out. Betances allowed a home run to Brett Nicholas, which was his first earned run of the year, but he still has an excellent ERA of 0.90. The Yankees sent Luis Severino (0-2, 4.86 ERA) to the hill today to face AJ Griffin (2-0, 3.18 ERA). Alex Rodriguez and Aaron Hicks remained out of the lineup due to injury, but A-Rod is expected back sooner than Hicks will be. Jacoby Ellsbury’s home run last night left Chase Headley as the only Yankees starter without a home run this season. 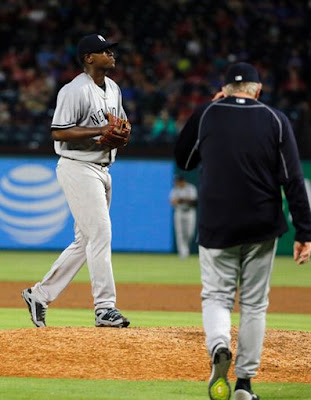 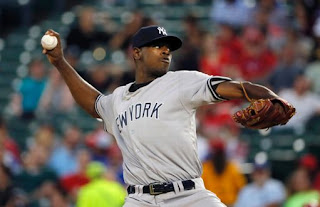 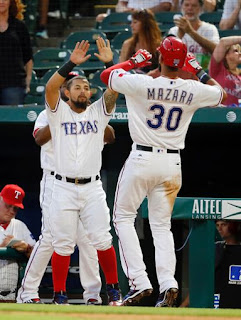 Picture Credit: Associated Press/Tony Gutierrez
2nd Inning
Both teams did not threaten in this inning. (Rangers 1-0)
3rd Inning
Ronald Torreyes continued to take advantage of his at-bats with a single, but the Yankees did not do much else. In the bottom of the third, after two quick outs, the Rangers singled, doubled, and then Severino intentionally walked Fielder. With the bases loaded, the Rangers scored five runs in this inning - Ian Desmond walked, followed by a Mitch Moreland 2-RBI single, Desmond scored on a wild pitch, and then Elvis Andrus added on with another single. (Rangers 6-0) 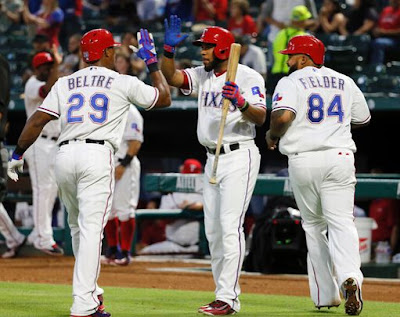 Picture Credit: Associated Press/Tony Gutierrez
4th Inning
The Yankees went down in order. Ivan Nova came in for Severino and set down the Rangers in order. (Rangers 5-0)
5th Inning
AJ Griffin, the Rangers starter, set the Yankees down in order. Ian Desmond made it 7-0 with a solo home run to center. (Rangers 7-0)
6th Inning
The Yankees wasted a Torreyes single and did not do any damage. Brett Nicholas’s RBI double made it 8-0. The Rangers were piling on runs at this point. (Rangers 8-0)
7th Inning
After a walk and a single, Mark Teixeira finally got the Yankees on the board with an infield single to cut the deficit to 8-1. The Rangers added on another run when Nova threw a wild pitch and Desmond scored. (Rangers 9-1)
8th Inning
Yankees went down in order. Chasen Shreve entered for Nova and his second batter, Rougned Odor, homered to right center to make it a 10-1 game. (Rangers 10-1)
9th Inning
Tony Barnette entered for Griffin to start the 9th and the Yankees did not threaten in this inning as well.