By Unknown - April 07, 2016
The Yankees completed their season-opening three-game series against the Houston Astros this afternoon in the Bronx. While the Astros won the season opener, the Yankees exploded Wednesday night for 16 runs to beat the Astros 16-6 with an offensive barrage. Tonight, the Yankees sent Nathan Eovaldi (14-3, 4.20 ERA in 2015) to the hill, who hopes to continue to gain the run support he did last year, with over seven runs a game. Eovaldi faced off against Mike Fiers (7-10, 3.69 ERA in 2015), who threw a no-hitter last year against the Los Angeles Dodgers on August 21. Starlin Castro and Carlos Correa both hoped to continue their hot starts tonight. 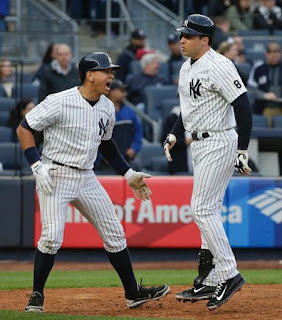 Picture Credit: AP/Julie Jacobson
Thursday, 4/7: Houston Astros 5 @ New York Yankees 8
1st Inning
Both Eovaldi and Fiers started well, as both teams went down in order.
2nd Inning
After two strikeouts by Eovaldi, Tyler White’s 2-run homer with Luis Valbuena on second gave Houston a 2-0 lead. The next batter, Preston Tucker, homered to right for a second consecutive homer to make it 3-0. In the bottom half, the Yankees got one run back as Chase Headley hit a sacrifice fly to left that allowed Mark Teixeira to score from third with one out. The Astros led 3-1 after two innings.
3rd Inning
Eovaldi retired the Astros in order, striking out George Springer and Carlos Correa., The Yankees got another run back when Jacoby Ellsbury’s line drive double split the gap in right center to score Didi Gregorius from first to make it 3-2.
4th Inning
The Astros continued their offensive surge when, with Carlos Gomez on second and Colby Rasmus on third and one out, Tyler White singled up the middle to score both Gomez and Rasmus to make it 5-2.  The Yankees, however, scored for the fourth straight inning. Brian McCann and Starlin Castro (he’s absolutely dominant right now) each hit a solo home run (not consecutive) off of Mike Fiers to decrease the Astros lead to 5-4.
5th Inning
The Astros went down in order in the top of the fifth. In the bottom half, Alex Rodriguez, who up to this point was hitless in the year, came up with Jacoby Ellsbury on third and one out. However, A-Rod quickly changed this, as he singled to center to score Ellsbury to make it a 5-5 game. The game was tied at 5 at the end of five innings.

6th Inning
Kirby Yates entered for Eovaldi to start the sixth and worked through the inning without issue. In the bottom half, Will Harris entered for Fiers. Harris worked around an error to end the inning without issue.
7th Inning
Chasen Shreve entered for Yates to start the seventh and retired the Astros in order. In the bottom half, Ken Giles entered with one out and Brett Gardner on first. After A-Rod singled off of Giles to put men on first and second, Mark Teixeira hit a slicing, opposite-field homer that barely flied over the left field fence (but it was enough) to give the Yankees an 8-5 lead after seven innings.

8th Inning
Dellin Betances entered in the eighth and set the Astros down in order in dominant fashion, striking out Carlos Correa and Colby Rasmus. In the bottom half, Tony Sipp worked around a walk without issue.
9th Inning
Andrew Miller, who is pitching with a broken hand (non-throwing hand), entered in the beginning of the ninth. Carlos Gomez and Tyler White hit singles to put men on first and second with one out. Miller then struck out Marwin Gonzalez on a full count to make it two outs. Then, as Yankee fans rose to their feet in Yankee Stadium on a 1-2 count, Miller struck out Erik Kratz to end the game to get his first save of the year.