By Unknown - April 17, 2016
It’s been a strange season for Yankees baseball. Although the Yankees are currently 5-6, only 3 games back in the American League East, and they’ve only played 6.79% (11 out of 162 games) of the season, Yankee fans everywhere have been calling for change. I’m a big statistics person, and most pieces I write (not including game recaps) are usually driven by numbers. With that in mind, I dove deep into the world of Yankees statistics so far this year, and here are ten hat will definitely surprise you. Please note that these statistics are accurate as of April 17, 2016. 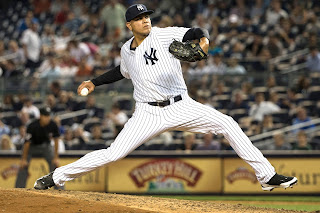 1. Betances’s Usual Dominance: Dellin Betances has as many strikeouts (15) as CC Sabathia (8) and Luis Severino (7) have combined. Severino and Sabathia have thrown for 21.1 innings, while Betances has thrown 6 innings.

4. Hits and Homers off Starters: The only Yankee starting pitcher to have less hits than innings pitched is Masahiro Tanaka, with 13 hits allowed in 17.2 innings. The worst offender of this statistic is Luis Severino, who has allowed 18 hits in just 10.2 innings pitched. Meanwhile, Nathan Eovaldi has allowed as many home runs (4) as the entire Yankee pitching staff (except Pineda), starter and reliever, have combined (4).

Batting
6. No In Between: The Yankees have four starters who are currently hitting at or above .314 (Carlos Beltran, Starlin Castro, Brian McCann, and Brett Gardner), but have five hitting at or below .222 (Didi Gregorius, Mark Teixeira, Alex Rodriguez, Chase Headley, and Jacoby Ellsbury). No regular starters are currently hitting between .223 and .313. Last year, out of the six batters (Beltran, Gregorius, Gardner, Headley, A-Rod, and McCann) who would have qualified for a batting title (3.1 plate appearances per team game), all six finished between .232 and .276.

9. Yankees Like Hitting At Home: The Yankees enjoy hitting at home in the Bronx. They are batting .280 as a team when they play in Yankee Stadium, but only .216 on the road. A-Rod has only 1 hit out of 15 Abs this year away from Yankee Stadium, while Starlin Castro, who is hitting .524 at home, is only hitting .118 on the road. Didi Gregorius is similar, hitting .316 at home and .154 on the road. Lastly, the Yankees have 6 regular starters hitting under .200 away, but only 3 at home.

10. Chase Headley: Hate all you want on Chase Headley (don’t worry, I’m guilty of that too), but here are two intriguing and positive statistics on him this season. He has a higher on-base percentage (.324) than Jacoby Ellsbury, A-Rod, and Didi Gregorius. Also, Headley has 3 stolen bases so far in 2016, which matches the total from his time as a Yankee from July 22, 2014 to the end of 2015. He played 214 games as a Yankee in 2014 and 2015, and has only played 9 games so far this season. He also walked 7 times, which is more than any Yankee batter except Gardner (7) and Teixeira (10). Lastly, he’s struck out only 6 times, which is the fewest out of any Yankee starter besides Gardner, who only has 5.