The Curious Case of Chase Headley

By Unknown - April 28, 2016
I think it's fair to say that as of now Chase Headley has taken the crown formerly held by Stephen Drew as the most ridiculed Yankee in the world of social media. The criticism of Headley is fair and grounded in fact. He is been an unmitigated disappointment since the Yankees gave him a four-year contract worth fifty-two million dollars following a somewhat productive half of 2014 in pinstripes. It seems as if every time Headley comes to the plate with runners in scoring position a failure is imminent. Due to the years and dollars the Yankees have committed to Headley, we are stuck with him until after the 2018 season. That being said, he hasn't given us much reason to believe he will turn it around any time soon, if ever. For this reason, the Yankees may have to strongly consider making a change. Although his fielding may have improved drastically from last season, how much longer can the Yankees continue to play an offensive liability as profound as Headley on a daily basis? 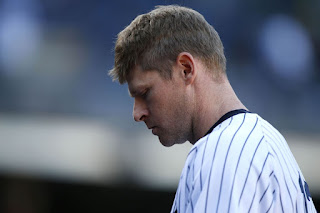 As we are all well aware, the Yankees offensive is in a state of complete disarray. While we also know that most of our offensive players have the capability to turn their respective seasons around, Headley is a notable exception. He has not been a consistent run producer for a couple years. I'm still perplexed at the fact that he hit 31 home runs with 115 RBI's in 2012, however I'm pretty sure that season was an aberration. To put it simply, Headley looks absolutely lost at the plate. Although we may not have have a viable alternative at the moment, I would strongly consider giving more playing time to Ronald Torreyes. It may be a small sample size, however when given the opportunity to play this season, Torreyes has performed relatively well. Thus far, Torreyes has eight hits in twenty at bats. Again, Torreyes may not have a track record, but at this point, virtually anyone is better than Headley.

I've also become increasingly frustrated by Joe Girardi's insistence that Headley will break out of this "slump" he's in. I placed the word slump in quotation marks because I think the extended period of Headley's offensive struggles have far exceeded the qualifications of a mere slump. Yes, Girardi is forced to play Headley because of his contract. On the other hand, there is no excuse to sit Torreyes after he's had a productive game in favor of an offensive liability. There have been a few occasions already this year where Torreyes has had a multi-hit game while playing in place of Headley, only to be relegated back to the bench the next day. This approach, in the opinion of any rational human being, is illogical.

It may be early in the season, but the Yankees are in trouble. The biggest of these concerns is an offense that simply cannot perform at a competent level. In response to this, the Yankees should be doing everything they within their control to rectify such an overt problem. Unfortunately, due to contractual obligations, there isn't much leeway to make substantial changes to the lineup. On the other hand, benching Headley would be conducive to the team's overall offensive production. This season, Headley is 8-65, and has yet to accrue an extra base hit! This is unacceptable. Something must be done! There is no excuse for him to hit anywhere else but ninth in the order. He is clearly the worst offensive player on this team, and should be treated accordingly.

I know many people may be reading this as simply an overreaction to the horrendous start the Yankees have gotten off to. I can assure you it is much more nuanced than that. Headley has not been a very good player during his tenure in pinstripes. Unlike Alex Rodriguez, who has also struggled, Headley has not shown he can be productive in quite a long time. Rodriguez also had three hits in last night's loss the Rangers, giving us reason to believe he can turn it around. At this point, the Yankees should be exhausting all available options to energize their struggling offense. Benching Headley is one of the only moves within Girardi's discretion that can potentially have a beneficial impact on the aforementioned circumstances. At the very least, even if Torreyes doesn't hit well, a benching would serve as a wake up call to our struggling third baseman. Needless to say, the Yankees cannot continue to have an automatic out in the lineup killing potential rallies. Unless something is done to rectify this problem, the offensive struggles will likely continue.