The Emergence of Johnny Barbato

By Unknown - April 23, 2016
While the Yankees bullpen has been lockdown so far this season, not all of its success can be attributed to the likes of Dellin Betances and Andrew Miller. Obviously, the Bombers have a nearly unhittable backend with Betances and Miller, plus the suspended Aroldis Chapman, but going into the season, there were a lot of questions for the pen. 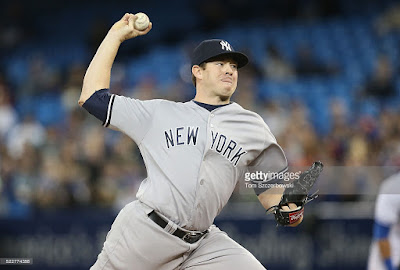 Picture Credit: Getty Images/Tom Szczerbowski
For the Yankees, they hoped that Chasen Shreve would rebound from a disastrous September last season and regain his mid-season form. But what about Justin Wilson? The still puzzling trade that sent the trusted lefty packing for Detroit left a big hole in the bullpen that many thought couldn’t be replaced. Obviously everyone was happy when Brian Cashman traded for Starlin Castro, but giving a guy like Adam Warren up wasn’t easy. Warren was as dependable as they come, an effective pitcher who did great in both starting and relief roles. Perhaps the biggest blow came when Bryan Mitchell, fresh off a dominant spring, suffered a toe injury that has him sidelined for three months. Only now did the Yankees realize what they had been missing in a guy like Warren. One question remained, who would be able to bridge the gap? 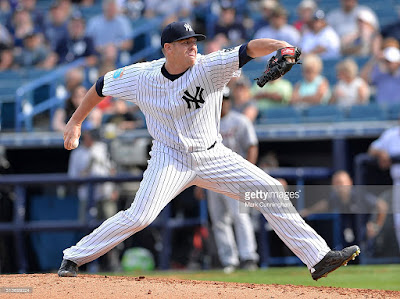 Picture Credit: Getty Images/Mark Cunningham
Johnny Barbato, acquired in a small trade for Shawn Kelley in the offseason of 2014, has emerged as a key piece in the Yankees bullpen. A quiet and focused player, Barbato looks mature beyond his years. Already a trusted arm of Joe Girardi, the 23-year-old has dazzled in his surprising MLB debut season so far. In his first game of the season, the righty struck out three of the five Astros batters he faced. While the Yankees took the loss, Barbato’s debut was certainly encouraging, as he allowed zero hits and runs. The quiet reliever took on quite the challenge when he entered to face the heart of the Toronto Blue Jays lineup on the road. For many relievers, rookie or veteran, this can be a daunting task. Barbato silenced the Jays lethal 3-4-5 section as he struck out Edwin Encarnacion and Russell Martin while yielding a single hit and no runs.

Of the Yankees 15 games this season, Barbato has made seven appearances, crafting an ERA of 3.00, striking out eleven and limiting opponents to a .161 batting average. If there is one thing to love about a guy like Barbato, it’s his mentality as a reliever. “You always gotta be ready," Barbato said after his first MLB win, “You gotta be ready when you get the call and go out there and do your job. Always being ready, always being prepared is key.” The 23-year-old is focused on the mound and realizes the importance of his role and so far, he has exceeded expectations. Even though it’s early in the 2016 season and the Yankees are at an underwhelming record of 6-9, one bright spot can be attributed to Barbato, who has put to rest the concerns of who will be bridging the gap.