Yankees offense shut down in 4-0 loss to Tigers

By Unknown - April 08, 2016
The Yankees kicked off the young season with their second series of the season as they traveled to Detroit for a weekend series. Game one featured young rising star Luis Severino (5-3, 2.89 ERA in 2015) against newly acquired Jordan Zimmermann (13-10, 3.66 ERA in 2015). Zimmermann received a large pay day this offseason signing a 5 year deal worth $110 million. Severino comes in 2016 with hefty expectations as many across baseball expect him to take the next step in his game and become the ace of the staff. 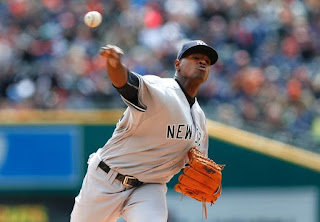 After a Brett Gardner walk, Starlin Castro, hitting in the 3-hole, grounded into an inning ending double play. The Tigers came to hit and were on Severino early as Ian Kinsler led off the inning with a double into the right field corner. Miguel Cabrera would be him around to score and the Tigers drew first blood with a 1-0 lead.

2nd Inning:
Other than a Chase Headley walk, the Yankees couldn't get any runners on. Nick Castellanos led off the inning with a single in which Didi Gregorius almost made a miraculous diving play in the 5.5 hole (the throw was late). Severino would then get a strikeout and a double play to end the inning.

3rd Inning:
Jacoby Ellsbury got on base with the first Yankee hit of the afternoon, but was thrown out stealing to end the inning. In the bottom half of the inning, Aaron Hicks made a marvelous play in right field to rob Miguel Cabrera of an extra base hit.

4th Inning:
The Tigers would tack on 2 runs on an RBI single from Jose Iglesias and a groundout from Anthony Gose.

6th Inning:
After allowing back to back singles, Severino was chased from the game after pitching 5+ innings. Johnny Barbato came on to get out of trouble. Barbato would pick up 2 strikeouts and get out of a bases loaded, 1 out jam unscathed.

7th Inning:
The Yankees couldn't add any offense and Cabrera added a run with a solo shot off Luis Cessa.

8th Inning:
Familiar face Justin Wilson came on for the Tigers in the 8th to face his former team. He set the Yankees down picking up 2 strikeouts.

9th Inning:
Gardner would lead off the inning with a single but the Yankees were unable to amount a comeback and were shut out.

Conclusion:
To put it frankly, this was not Luis Severino's best start. The young righty was able to bail himself out of trouble a few times, but he allowed 10 hits and 3 runs across 5 innings. Granted, he was unable to get any help from him offense who was shut down by Jordan Zimmermann, so his resilience is a positive. The Yankee offense seemed due for a poor game after coming out scorching hot against the Astros.