By Unknown - April 13, 2016
The Yankees were coming off of their first AL East win in the series opener against the Blue Jays, looking to get Michael Pineda his second win of the season. The Blue Jays sent J.A. Happ to face off against the Yankees lineup tonight. 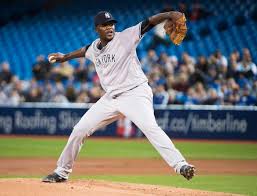 Jose Bautista and Edwin Encarnacion both singled for the Blue Jays but Pineda got out of it with a ground ball to get the final out.

2nd Inning
Starlin Castro walked, but the Yankees couldn’t get the offense going. In the bottom half, Russell Martin walked. After Pineda struck out Justin Smoak to get the second out, Ryan Goins doubled to score Russell Martin and give the Blue Jays an early 1-0 lead.

3rd Inning
Ronald Torreyes singled to continue his hot start but Austin Romine lined out to first who was able to finish off the double play. The Blue Jays went down in order.

4th Inning
Mark Teixeira walked and Carlos Beltran singled to get 2 runners on with one out, but the Yankees couldn’t capitalize. Michael Saunders walked with one out for the Blue Jays. The Yankees then got a double play by striking out Russell Martin and Austin Romine making a perfect throw to catch the stealing Saunders.

5th Inning
Ronald Torreyes doubled to lead off the inning followed by an Austin Romine single with no outs which got Torreyes to third. Ellsbury then popped out to Donaldson at third. Aaron Hicks gounded out to third to score Torreyes and tie the game up 1-1. Justin Smoak walked to lead off the inning and Ryan Goins followed with a double to send Smoak to third. Kevin Pillar then reached on a throwing error by Torreyes, scoring Smoak, and moving Goins to third. Josh Donaldson then  grounded into a double play, scoring Goins, making the game 3-1.

6th Inning
The Yankees got a couple runners, but couldn’t score. The Blue Jays also weren’t able to get anything going this inning.

8th Inning
Drew Storen replaced Brett Cecil this inning and Mark Teixeira hit a solo home run to bring the Yankees within one run, 3-2. The Blue Jays scored four this inning off of Ivan Nova on back to back doubles from Donaldson and Bautista, then a Troy Tulowitzki single. Then Saunders doubled, Russell Martin hit a sacrifice fly to score Tulowitzki, and Ryan Goins hit a single to score Saunders and make the game 7-2.

9th Inning
Pat Venditte, the switch pitcher replaced Storen for the inning. He set the Yankees down in order to end the game. The Blue Jays won 7-2.