By Unknown - April 15, 2016
The Yankees dropped their third straight game tonight, losing to the Seattle Mariners 7-1. Despite having numerous opportunities to break the game open, the Yankees failed to get a single hit with runners in scoring position. Hopefully, this doesn't become a reoccurring theme, however the Yankees look strikingly similar to the team that struggled to hit in the second half of 2015. Another trend that continued tonight was the failure of Yankee starters to go deep into the game and give the bullpen some rest. Severino lasted only five and two thirds of inning, giving up eight hits and four runs. His record drops to 0-2. Tomorrow, the Yankees take on the Mariners once again, as CC Sabathia will face off against Felix Hernandez at 1:05 ET. 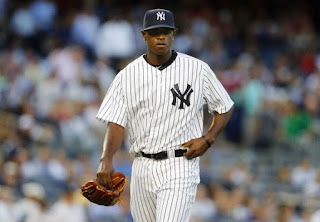 Yankees: Brett Gardner launched a solo home run to right field, putting the Yankees ahead 1-0. With two outs and runners at first and second, Dustin Ackley popped out to conclude the inning.
1-0 Yankees.

Yankees: Despite a two out single and stolen base from Chase Headley, the Yankees failed to score.
l-0 Yankees.

Mariners: With a runner on second, Starlin Castro turned his tremendous behind the back catch into a double play preventing the Mariners from putting together a rally.
1-0 Yankees.

Mariners: Following Seth Smith's one out double, ex-Yankee Robinson Cano drove him in on an RBI single. Nelson Cruz then reached base after Didi Gregorius bobbled a routine ground ball. Luckily, Seager lined out to Gregorius, who proceeded to double up Cano at second to end the inning.
Mariners 1 Yankees 1.

Yankees: This inning featured a #RISPfail of epic proportions for the Yankees. After a leadoff walk to Ackley, Castro singled to right field. Once Castro advanced to second, the Yankees were set up with runners on second and third with no outs. After Gregorius struck out swinging, Headley and Ellsbury struck out looking to end the inning.
Mariners 1 Yankees 1.

Mariners: Chris Ianetta gave the Mariners the lead when he clubbed a two-run home run to drive in Adam Lind, who reached on a leadoff single.
3-1 Mariners.

Yankees: The Yankees were set up with runners on first and second with no outs after Gardner singled and Teixeira walked. Subsequently, Brian McCann struck out. Beltran hit the ball hard to right field, however it was right at Cruz. This allowed Gardner to advance to third. Ackley concluded the #RISPfail with a fly out to left field.
3-1 Mariners.

Mariners: Seth Smith led off the inning with a walk. The Mariners then had first and second with no outs after Cano followed with a single. Cano would later score on Lind's RBI single making it 4-1. With two outs and runners on first and second, Severino was pulled for Kirby Yates. Despite walking Leonys Martin, Yates escaped the inning without further damage.
4-1 Mariners.

Mariners: Tyler Olson made his season debut, relieving Kirby Yates with one out and a runner on third. Franklin Gutierrez's sac fly made it 5-1 Mariners.
5-1 Mariners

Mariners: Chris Ianetta drove in Nelson Cruz with an RBI single to make it 6-1.
6-1 Mariners.