By Unknown - May 15, 2016
As had been expected going into the 2016 season, the starting rotation hasn't necessarily been a strong point. Luis Severino has been flat out awful, however the inconsistencies of Nathan Eovaldi and Michael Pineda have been equally as troubling. While Eovaldi has shown signs of outright brilliance this season, Pineda has been flat out horrendous in most of his starts. I'm growing increasingly tired of hearing praise reaped upon Pineda's "stuff." At the end of the day, a pitcher's "stuff," is irrelevant. As Yankees fans, we need look no further than AJ Burnett's tumultuous tenure in the Bronx. I will admit Burnett was a huge part of the 2009 championship so the comparison may be flawed, however parallels can certainly be drawn between the two. Having been acquired from the Mariners in 2012, in exchange for then-highly touted prospect Jesus Montero, Pineda had high expectations to meet. Currently, Pineda is 27 years old and STILL hasn't figured it out. Whether it be injuries or inconsistencies, there's always an impediment to any significant process in this regard. If his struggles continue, the Yankees should pull him from the rotation in favor of a pitcher who has a chance of providing the team with a reasonable chance of winning on any given night because we all know Pineda has not been capable of that this season. 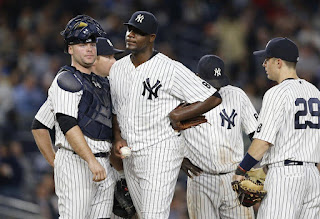 As previously stated, Michael Pineda has a tremendous amount of talent. I still remember watching in amazement of his brilliant performance on Mother's Day 2015, in which he struck out sixteen over seven innings. Obviously to expect this on a regular basis from any pitcher would be absurd, however the very fact that he has exhibited such ability is what makes his struggles so frustrating. Pineda's problems appear to be primarily mental. You would think that if the issue was this mundane the Yankees would have been able to rectify it by now. Unfortunately, Pineda's start to the 2016 season is very troubling. Over seven starts, he's 1-4 with a 6.28 ERA. For someone who was counted on to be the team's number two starter, we should be worried, especially when taking into account his finish to the 2015 season.

Last year, Pineda got off to a great start, however he cooled off considerably as the season progressed, and reverted back to the inconsistencies that have come to define his tenure in the Bronx. During the offseason, I wrote an article advocating for Pineda to be traded. It turns out that all the concerns I raised in that piece have come to fruition. I don't if he's mentally unhinged, or simply incapable of putting all his talent together, but alarms should be raised either way. Had the Yankees moved Pineda this offseason, there's a very good chance we could have gotten back some piece of value. In 2015, Pineda showed that at the very least he could be a serviceable starter, and that likely would have appealed to a number of teams. On the other hand, he exhibited some very disturbing trends that have come around to rear their ugly heads once again this season.

The slightest disruption of any sort of rhythm Pineda has developed throughout the course of a game has proved to be catastrophic on a number of occasions. It appears that as soon as someone reaches base he becomes mentally unhinged. Instead of mitigating his damages like any serviceable starting pitcher attempts to do, Pineda gets destroyed by opposing lineups. Considering the current state of the Yankees offense, being put into a deep hole is unacceptable, and in all likelihood will result in a loss. I have no doubt that those within the Yankees brain trust, led primarily by pitching coach Larry Rothschild, have worked strenuously to help Pineda overcome these issues, however those efforts have proved largely unsuccessful. Wednesday's 7-3 loss to the Royals perfectly exemplifies the phenomenon identified above. Although he settled down following a disastrous inning in which he gave up four runs, including a three-run homer to Salvador Perez, that does not negate the very fact that he dug himself into a hole too steep for the offense to overcome.

Despite the continuation of his profound struggles, the Yankees have shown no indication of even considering the possibility of removing Pineda from the rotation. This can likely be attributed to a lack of better options available internally. Due to the injuries of CC Sabathia, who is eligible to return from the disabled list on May 20th, and more recently the struggling Luis Severino, Ivan Nova has been thrust back into the rotation. By no means do the Yankees have a plethora of major league ready starting pitching talent in the minors, however, at this point, almost anybody would be better than Pineda. I'd rather give a younger guy who has shown signs of moving in the right direction a shot, as opposed to seeing Pineda get bombed every fifth day. While the lack of starting pitching depth is a fair explanation for the question posed above, I view the hesitancy to consider removing Pineda from the rotation as a pattern of a much more disturbing trend of behavior.

To put it quite simply, in recent years the Yankees have vehemently refused to take on action on certain players who simply haven't performed. The 2015 Stephen Drew experiment is a case in point. Despite having a dismal season, the Yankees wouldn't budge, allowing him to continuously drag down the offense. The same can be said for Chase Headley this season, although he has shown signs of improvement recently so I'll refrain from commenting on that for the time being. After the highly touted Jesus Montero turned out to be a bust, many believed Brian Cashman was a genius for pulling the deal off. While it certainly appeared that way last season, the trade may turn out to simply be a lose-lose. I'm not intending to view this in such a cynical manner, however it's not out of the realm of possibility that Cashman's ego is preventing any necessary moves regarding Pineda.

I've said it before, and I'll say it again, the Yankees have to part ways with Michael Pineda. He may possess an impressive amount of talent, however his inability to put it all together is frustrating, and unlikely to be resolved any time soon. A string of injuries prevented Pineda from achieving his full potential during his first few years in the Bronx, and that allowed us to hold out hopes for his potential. He showed signs of brilliance last season, but that promise was overwhelmed by his inconsistencies. Thus far in 2016, he's been an unmitigated disaster. Due to the current state of the rotation, the Yankees essentially have no choice but to keep running him out there every fifth day. If the Yankees are still in the playoff hunt come July, they MUST get starting pitching help. Although I want nothing more than for Pineda to miraculously overcome whatever mental issues are infecting him when he pitches, the Yankees must be pragmatic. If his struggles do persist the Yankees have to take some course of action because conscientiously allowing a loss to occur every fifth day is outright unacceptable.