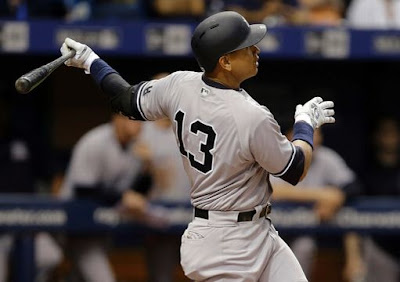 With one swing and a beautiful bat flip, Alex Rodriguez delighted Yankees fans everywhere with a long, two-run home run to just left of center, his sixth of the year, to extend the Yankees lead to 3-0. There were many questions coming into the game about Carlos Beltran’s dominance at the plate as a DH, and whether his move back to right field would hurt the team, even as A-Rod returned.

After the Yankees squandered having runners on first and second with none out to start the game, Chris Archer (3-6, 4.62 ERA) settled down to retire the next seven batters and 15 of 17. Masahiro Tanaka (3-0, 2.89 ERA) pitched a gem as well; he allowed just two baserunners (both on hits) in seven innings, and struck out four batters. Tanaka retired the first twelve batters of the game, before Steve Pearce reached on a single as the first Rays baserunner in the fifth. 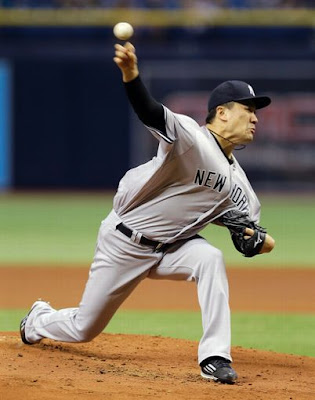 The Yankees eventually broke through in the sixth, on a Brian McCann RBI groundout to first, scoring Brett Gardner. A-Rod followed McCann with his long homer to center. In the top of the eighth, Carlos Beltran added a fourth run with a solo homer to right, his eleventh homer of the year to extend the lead to 4-0.

After seven innings, Yankees manager Joe Girardi replaced Masahiro Tanaka with Andrew Miller. Although he allowed two baserunners to reach, one on a single and another by a hit by pitch, he worked out of the inning, as Hank Conger struck out and Brandon Guyer flied out to center.

Steve Pearce hit a solo home run off of Kirby Yates, who came in to start the ninth for the Yankees. Joe Girardi then decided enough was enough (for some odd reason), and brought in Aroldis Chapman, who sealed the 4-1 victory with two strikeouts (first strikeout was a dropped third strike).