By Unknown - May 05, 2016
With their 7-0 win last night, the Yankees finally ended their six-game losing streak. Today, the Yankees were looking to win their first series since the Tampa Bay series at home, on April 22-24. Winning today would also give the Yankees their first road series win of the season. The Yankees sent Masahiro Tanaka to the hill to face Baltimore’s Kevin Gausman. Earlier today, the Yankees sent James Pazos down to Triple-A, while calling up OF Ben Gamel. Gamel has never played at the majors level in his career. Meanwhile, sending Pazos down eliminated the extra arm the Yankees were carrying in their bullpen. Brett Gardner was out of today's lineup after his elbow was hit by a pitch. 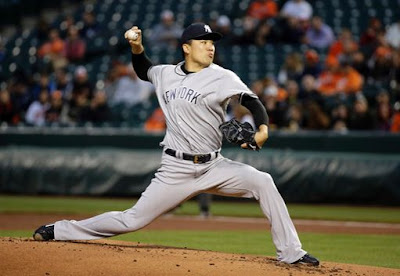 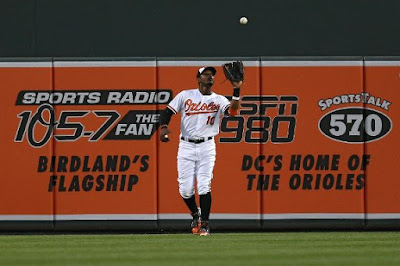 Picture Credit: Getty Images/Patrick Smith
Matt Wieters singled with one out, but Tanaka had no issue with the rest of the inning. (Scoreless) 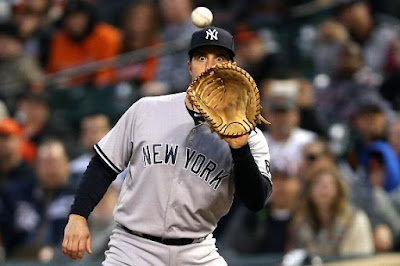 Picture Credit: Getty Images/Patrick Smith
3rd Inning
Aaron Hicks led off the inning with a single, but Didi Gregorius tried to bunt him over or bunt for a hit, but his resulting bunt went right back to Gausman and Hicks was out at second. The Yankees did not threaten the rest of the inning. In the bottom half, the Orioles got Adam Jones on first and Ryan Flaherty on second, but Chris Davis grounded out and Tanaka averted the jam. (Scoreless) 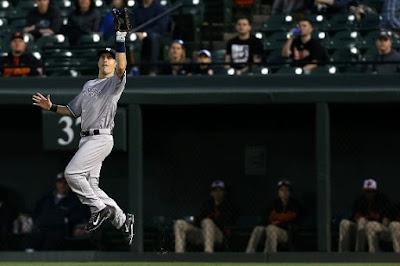 Picture Credit: Getty Images/Patrick Smith
4th Inning
Starlin Castro led off the inning with a double, but after McCann's fly out moved him to center, Mark Teixeira grounded out to first, and Castro was stuck at first. Then, Carlos Beltran flied out, and the Yankees failed twice with RISP. Between innings, Yankees manager Joe Girardi was ejected after arguing about a balk in the top half of the 4th. The Orioles got runners on first and second again with one out, but Jonathan Schoop grounded into a 5-4-3 double play to end the inning. (Scoreless)
5th Inning
Both teams went down in order. (Scoreless)
6th Inning
Kevin Gausman retired the Yankees in order and had retired nine straight batters after the top of the sixth. The Orioles went down in order as well. (Scoreless)
7th Inning
After Mark Teixeira singled with one out, Carlos Beltran grounded into a double play to end the top of the seventh. Jonathan Schoop singled with two outs and none on, but Pedro Alvarez struck out on a 2-2 slider to end the inning. (Scoreless)
8th Inning
Kevin Gausman continued to dominate Yankees hitters as he set them down in order. Tanaka retired the Orioles in order. (Scoreless)
9th Inning
Darren O'Day entered for Gausman to start the ninth. Chase Headley pinch-hit for Torreyes, but shockingly, he grounded out on the first pitch. He has been terrible this year at the plate. After Starlin Castro singled with two outs and none on, Orioles closer Zach Britton came on to face Brian McCann. On the 3-1 pitch, McCann swung and missed, both Castro was picked off at second! A terrible and untimely base running mistake. In the bottom of the ninth, Dellin Betances entered for Tanaka. After striking out Chris Davis, Betances walked Mark Trumbo, and Joey Rickard pinch ran for Trumbo. Then, Matt Wieters hit a long fly ball off of Betances to the wall at right...but Dustin Ackley leaped up and caught it before the ball hit the wall! Rickard was way off first and he was doubled up, 9-3, and the inning was over. What a play! (Scoreless)
10th Inning
Brian McCann, whose at-bat did not count after Castro was picked off, walked to start the inning. Brett Gardner came into the game to pinch-run. However, Britton worked through the tenth without issue. Johnny Barbato entered for Betances to start the tenth. After Hyun Soo Kim singled, Jonathan Schoop singled into the gap in left center, and there were runners on the corners with none out. Andrew Miller then entered to face Pedro Alvarez. Alvarez hit a sacrifice fly to center and the Orioles won 1-0.
Next Game: Friday, May 6: Yankees (Michael Pineda) vs. Red Sox (Rick Porcello)