By Unknown - May 28, 2016
Michael Pineda was hit hard again, and the Rays jumped on him early and often to take Saturday’s mid-afternoon game, 9-5. Pineda (2-6, 6.92 ERA) allowed nine hits and six earned runs in just 3.2 innings, and the Rays scored five runs in the first two innings and put the Yankees in a deep hole early. 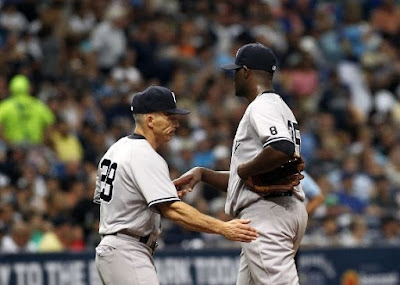 Pineda struggled once again in the early innings and was hit hard. After a hit-by-pitch and double to start the bottom of the first, Evan Longoria’s sacrifice fly put the Rays on the board. Logan Morrison and Corey Dickerson added RBI singles of their own to make it 3-0 after the first. Then, Evan Longoria produced the next three Rays runs on his own, with a 2-run homer in the bottom of the second and a RBI single in the fourth.

The Yankees wasted a huge opportunity for the second straight day, as they failed to score with runners on first and second and none out in the top of the first. Carlos Beltran drilled a line drive homer to left in the fourth, his 2500th hit of his career and 12th homer of the season, but the Yankees still trailed 6-1 after four innings. 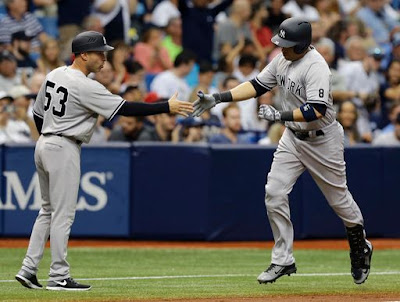 Picture Credit: Chris O'Meara/Associated Press
After Luis Cessa took over for Nick Goody in the fifth, Hank Conger drilled a 3-run homer to right, his first homer of the season, to extend the Rays lead to 9-1.

However, New York didn’t go down without a fight. In the seventh, Austin Romine’s RBI single and Ronald Torreyes’s walk with the bases loaded made it 9-3. In the eighth, Didi Gregorius and Austin Romine hit back-to-back RBI singles to make it 9-5. However, both Jacoby Ellsbury and Aaron Hicks grounded out, and the Rays avoided further trouble.

Although Tampa Bay’s Matt Moore allowed eight hits in 6.2 innings, Moore (2-3, 5.31 ERA) limited damage to only three earned runs, and his seven strikeouts today led him to his second win of the season. In a non-save situation, Alex Colome came in for a scoreless ninth to secure the victory.

Chase Headley went 3-for-3 today with a walk and two runs, and Austin Romine went 3-for-4 with 2 RBIs.