CC Sabathia's bad years have been worth it

By Unknown - May 11, 2016
With each passing game, we move closer to the end of CC Sabathia’s tenure with the Yankees. Sabathia’s contract comes off of the books after the 2017 season and there’s no chance the Yankees bring him back. But when we look back on CC’s time in New York, we should come to a realization that all the money the Yankees gave him was worth it. Even if they weren’t all as successful as the Yankees and their fans had hoped it would be. 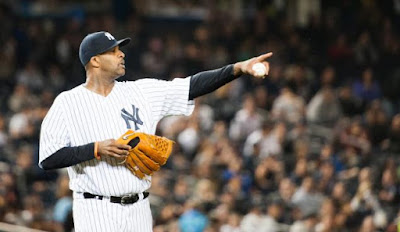 
When Sabathia originally signed with the Yankees after the 2008 season, everyone instantly vaulted the Yankees into World Series contention. Sabathia was simply magnificent in 2008, especially when he was dealt to the Brewers. With the Brewers, Sabathia went 11-2 with a 1.65 ERA in 17 starts and there was talk if he should win the Cy Young even though he only spent half a season in the National League. That’s what the Yanks were looking forward to having head their staff.

In Sabathia’s first season in New York, everything went right. He won 19 games, struck out 197 batters, finished fourth in the Cy Young race and won a World Series – the last one the Yanks have won. Not to mention he won the ALCS MVP award on the team’s road to their 27th championship title.

But through all the bad moments, the first few seasons – 2009 particularly – stand out and make it all worth it. Without Sabathia’s dominance during the ’09 regular season, and even more so during the postseason, the Yankees last championship season would still be 2000. What CC did during the 2009 playoffs was incredible. In his three starts in the ALDS and ALCS, Sabathia 22.2 innings while only allowing three earned runs and striking out 20 opponents. He wasn’t a slouch in the Fall Classic either posting a 3.29 ERA in two starts.

Five straight seasons of 28-plus starts, 200-plus innings and 14 or more wins is what Sabathia gave us to start his Yankees career. Yes his velocity is down in 2016. Yes he still hasn’t adapted to the finesse style of pitcher he needed to become back in 2013. And after all that, if we could go back and do it again with only way to acquire him was by giving him the same deal – knowing what we know now – I’d do it all over again, just the way it was.