By Unknown - May 17, 2016
After a huge 7-5 win against the White Sox on Sunday afternoon, the Yankees traveled to Arizona to start a three-game series against the Diamondbacks at Chase Field. Chase Headley continued to play well; in his last six games, he has six RBIs, six hits, four runs, and two home runs. The Yankees sent Chad Green to make his Major League debut against Arizona's Robbie Ray. In Triple-A Scranton this year, Green went 2-3 with a 1.22 ERA, and allowed 29 hits in 37.1 innings, while striking out 36 batters. Monday's game was the beginning of a seven-game road trip out west for the Yankees, with three at Arizona and four at Oakland. 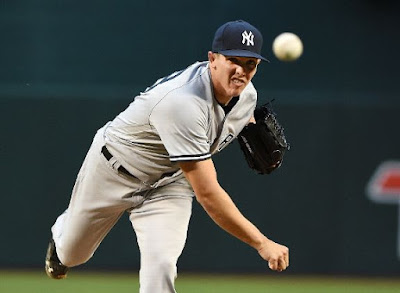 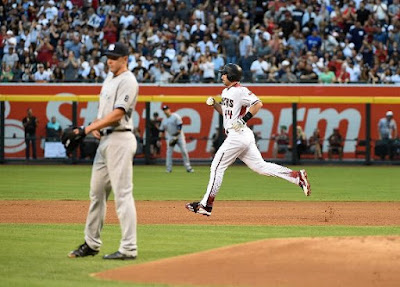 Picture Credit: Getty Images/Norm Hall
The Diamondbacks weren’t done. Jake Lamb doubled and Yasmany Tomas singled, but Didi Gregorius made a great play on a Brandon Drury grounder to shortstop, and Mark Teixeira helped out Green with a nice backhand scoop at first to end the inning. (Diamondbacks 1-0)
2nd Inning
Didi Gregorius singled with none on and two outs, but Austin Romine grounded out. After Chris Herrmann singled to start the second, he stole second, and then with two outs, Jean Segura doubled to center to make it 2-0. (Diamondbacks 2-0)
3rd Inning
The Yankees went down in order. Green got out of trouble by striking out Chris Herrmann with two on and two outs. (Diamondbacks 2-0)
4th Inning
After a Teixeira double and Beltran single to put runners on the corners with none outs, Chase Headley singled to right to make it 2-1. 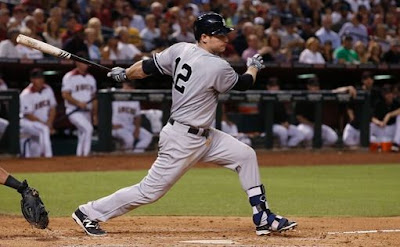 Picture Credit: Associated Press/Ross D. Franklin
With runners on second and third and one out, Didi Gregorius had a chance to tie the game but he popped out to shortstop. Robbie Ray then walked Romine to face Green, and he struck out Green on a full-count fastball to end the fourth. The Diamondbacks went down in order. (Diamondbacks 2-1)
5th Inning
Leading off the inning, Jacoby Ellsbury tripled to deep right center, and then the relay throw from Nick Ahmed, the shortstop, to third base bounced off Ellsbury’s head and Ellsbury scored. A triple and an error made it a “Little League inside-the-park home run!” After the Diamondbacks put men on first and second and none out thanks to a Mark Teixeira error at first and a walk to Goldschmidt, Jake Lamb homered to right center to make it a 5-2 game. 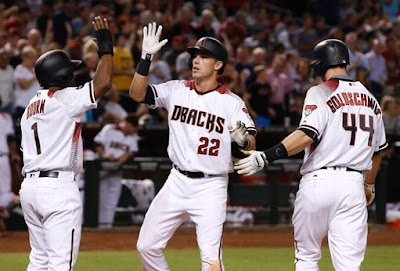 Picture Credit: Associated Press/Ross D. Franklin
Yasmany Tomas doubled and that was it for Green’s debut. Nick Goody entered and Chris Herrmann hit a sacrifice fly with Tomas on third and one out. After Nick Ahmed doubled, the pitcher Robbie Ray singled to center, scoring Ahmed, to make it a 7-2 game. (Diamondbacks 7-2)
6th Inning
The Yankees went down in order. Conor Mullee made his Major League debut. He loaded the bases with two walks and a hit by pitch, and then he walked Chris Herrmann to make it 8-2. (Diamondbacks 8-2)
7th Inning
The Yankees went down in order again. Phil Coke started the seventh, after loading the bases on a Didi Gregorius error, hit by pitch, and a Michael Bourn single, Paul Goldschmidt’s double play brought home the ninth run. (Diamondbacks 9-2)
8th Inning
Andrew Chafin entered to start the eighth. With Teixeira on first, Beltran grounded into a double play to end the top of the eighth. After two outs, Chris Herrmann singled and then Nick Ahmed followed with a double to left, scoring Herrmann. Then, after Rickie Weeks walked, Jean Segura's 2-RBI triple scored both Weeks and Ahmed to make it 12-2. (Diamondbacks 12-2)
9th Inning
Randall Delgado came in to start the ninth and threw a scoreless inning. Diamondbacks won, 12-2.
Next Game: Tuesday, May 17: Yankees (Michael Pineda) @ Diamondbacks (Zack Greinke)