By Unknown - May 04, 2016
Another day, another Yankees loss. Unfortunately, I've grown accustomed to uttering the aforementioned phrase due to their disgraceful 2016 performance. Throughout my twenty years on this Earth I have never seen a Yankees team this bad. I think I speak for every Yankee fan when I emphatically state that ENOUGH IS ENOUGH. I'm tired of hearing some fans make excuses for this team. "It's only May." "They'll turn it around soon." "These guys will play to the numbers on the back of their baseball cards." Why do so many fans share this sense of false hope? This Yankees team has shown no reason to make us believe they can right the ship any time soon, if at all. Never before have the Yankees been eight games under .500 during the Joe Girardi era (post-2009). I hate to break to some of you, but this team is not the 2005 Yankees, who got off to a similarly awful start. They do not have the talent and spunk to dig themselves out of what appears to be an insurmountable hole. They have no Derek Jeter to rally the forces. They have no perennial all stars. Instead, this team is comprised of a bunch of guys who just don't seem to care. That, ladies and gentlemen, is what should worry us the most. 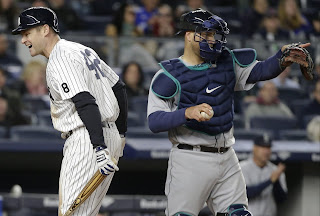 I've wanted to hold off from writing this rant because I, like many other Yankees fans, believed they would turn it around. I no longer maintain this belief. Lets be honest. This team was not competently constructed. It's mind boggling to me that Brian Cashman would put together such a lethal 7-8-9 at the backend of the bullpen, but not realize that such a weapon is useless if the team can't hand them a lead. I think it's clear that the Yankees offense from the second half of 2015 has carried over into this season. The offense is an unmitigated disaster. With the exception of Alex Rodriguez, who has played very well the last week or so, almost every offensive player is struggling immensely. They are incapable of hitting with runners in scoring position. Never before have I seen anything like this. It's unacceptable that a lineup containing so many high priced names continuously fails in the big spot. Oh, and don't even get me started on Chase Headley. I'll discuss him later.

I planned on structuring this rant into an itemized list, which critiqued certain players or aspects of the team, however I determined an extemporaneous style would flow much better. It appears as if every time the Yankees do one thing right, everything else goes wrong. If they pitch well, they can't hit. If they hit well, they get a lackluster performance from one of their starters. The last two games are a case in point. They scored seven runs against the Red Sox in Sunday's 8-7 defeat. Normally, this should be enough to win a baseball game. Unfortunately, Nathan Eovaldi's frustrating inconsistencies continued, and despite this obvious fact, Girardi left him on the mound for far too long, leading to a devastating loss. Last night, on the other hand, the Yankees only gave up four runs, however they failed to hit. If there's one thing this team has proven it is that they are consistently awful at all facets of the game.

Whenever I write about my frustrations with the Yankees, a famous Albert Einstein quote comes to mind. Einstein once defined insanity as, "doing the same thing over and over again and expecting different results." This is exactly what we're seeing with the Yankees. Chase Headley is one of the worst players in major league baseball. I think, at this point in the season, that is a fair assessment. We are 24 games in, and he has yet to collect an extra base hit! That's unfathomable. Despite this, Girardi continues to play him every day. I recently wrote an article critiquing Headley, so I won't beat a dead horse here, but for the sake of the team he needs to be put on the bench. He is a liability, and honestly, he epitomizes the Yankees offense at this point. Headley is an automatic out, who we as fans have absolutely no faith in.

Headley is not the only one to blame. My criticism applies to every player in the Yankees lineup. From top to bottom, the lineup is full of players who just don't seem to care. As previously stated, as a fan of this team, there is nothing more frustrating to see than the players who are representative of a brand you love so much perform with a lack of enthusiasm, and quite frankly in an apathetic manner. Despite knowing that they will be shifted against, these players refuse to hit the ball the opposite way. Jacoby Ellsbury and Brett Gardner are not the catalysts we need them to be. Didi Gregorius has reverted back to his old ways with numerous boneheaded mistakes. Chase Headley is flat out awful. Starlin Castro and Carlos Beltran started off hot, but have cooled off. Our other "run producers," like A-Rod, Mark Teixeira, and Brian McCann just haven't performed. I'm at a loss for words.

Now, it's time to discuss the rotation. I think it's fair to say that heading into the season we knew this would likely be their achilles heal. I will give credit where credit is due. As someone who has been critical of Masahiro Tanaka, he has exceeded my expectations and actually performed quite well. CC Sabathia, for the most part, has been a serviceable fifth starter. Aside from these two, everyone else has been atrocious. Eovaldi has exhibited flashes of brilliance, as we saw in Texas, but proceeded to follow that up with a pathetic performance in Boston. This has been the case for his entire career so I guess we shouldn't be too surprised. Michael Pineda and Luis Severino have been utterly horrendous. Pineda is a head case who just can't seem to get it together. Whenever he starts to struggle, he becomes unhinged and his troubles are only exacerbated. There's no doubting he has a tremendous amount of talent, however I'm increasingly pessimistic of his prospects for harvesting it and becoming a good starting pitcher. Severino, on the other hand, has also been awful, however he is only 22 so these growing pains should have been expected. If the Yankees are serious about competing this year, they would send him to the minors on a temporary basis to straighten himself out. If they don't plan on being a playoff team this year, as all signs are beginning to indicate, then I'd let him figure it out in the majors. Nonetheless, this is not a starting staff that will bring the Yankees to the promise land.

In summation, the Yankees have shown us no signs of life. Currently, they sit at the bottom of the AL East, six and a half games out of first place. This deficit is by no means insurmountable, and they are by are not done, however they will be soon if they don't start performing. Seeing General Manager Brian Cashman express accountability was encouraging, however this is meaningless unless we begin to see rapid improvements. I've been calling for both Cashman and Girardi to be fired for quite a few years now, and if the Yankees finish with a losing record, these may become serious discussions. Again, I own a calendar so I'm well aware that it's only May. But, make no mistake about it, NOW is the time to press the panic bottom. This team is failing on all cylinders. They have an anemic offense, a mediocre starting staff, and a great bullpen that is of no use because they can't build up a lead in the first place. Unless we see some changes very soon, this will be a long summer in the Bronx. There will so many empty seats at Yankee Stadium that they'll be begging people to come to games by retiring Nick Swisher's number. I currently have no faith that this lifeless bunch will turn it around, but hopefully they prove us wrong. Because if they don't, last place will become a very familiar spot until 2019!

This is the first in what will likely become a series of rants. I'm looking forward to reading what my colleague Chad Raines has to say in his upcoming version.