By Unknown - May 19, 2016
After losing 12-2 on Monday, the Yankees lost Game 2 of this three-game series at Arizona by a score of 5-3. Zack Greinke pitched well over seven innings, and Michael Pineda struggled again, giving up five earned runs on nine hits in just five innings. In the top of the ninth, the Yankees were able to get the tying run to the plate in Didi Gregorius, but he grounded out to second to end the game. Today, the Yankees sent Nathan Eovaldi to the mound to face Arizona’s Shelby Miller. The Yankees looked to salvage this three-game series by avoiding the sweep tonight. 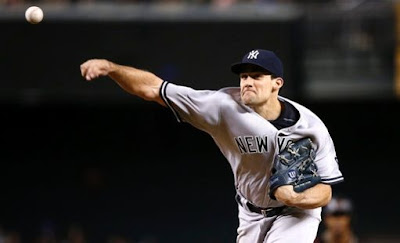 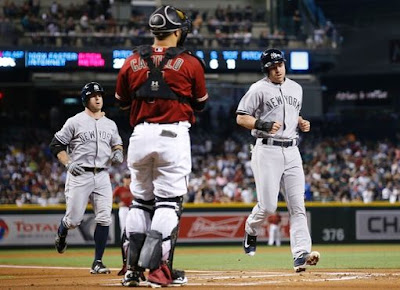 Picture Credit: Associated Press/Ross D. Franklin
In the bottom of the first, Jean Segura doubled on a ground ball off the second base bag, and with him on third and one out, Paul Goldschmidt grounded to third, Chase Headley fielded it, looked to Segura, who was halfway home, but threw out Goldschmidt at first instead of getting Segura, who would have been out as he was not even close to home. Goldschmidt’s RBI ground out cut the Yankees deficit in half. (Yankees 2-1) 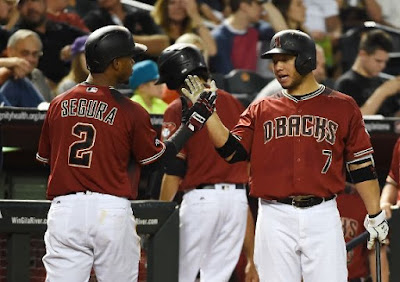 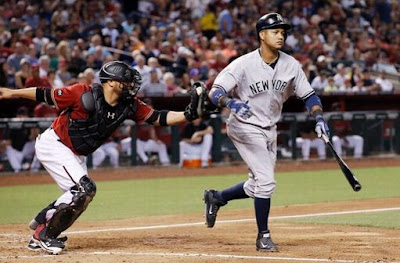 Picture Credit: Associated Press/Ross D. Franklin
The Diamondbacks went down in order, and Eovaldi had retired 12 in a row to this point. (Yankees 2-1)
6th Inning
After Chase Headley singled with one out, Nathan Eovaldi bunted him over to second, and Ellsbury followed with a RBI single to extend the Yankees lead to 3-1. Andrew Chafin entered to finish off the sixth. Eovaldi retired the Diamondbacks in order for the fifth straight inning, and he had retired 15 in a row to this point. (Yankees 3-1)
7th Inning
Jake Barrett entered for Arizona and retired the Yankees in order. In the bottom of the inning, Yankees manager Joe Girardi made a questionable call to put in Dellin Betances to start the seventh. Up to this point, Eovaldi had retired 18 in a row. After walking the first two batters, however, Betances worked his way out of the inning with a strikeout, flyout, and then a strikeout. His 31 pitches in the seventh inning tonight probably makes him unavailable tomorrow at Oakland. (Yankees 3-1)
8th Inning
The Yankees did not threaten in the top of the eighth. Andrew Miller entered to start the eighth and gave up a solo home run to Chris Owings, but struck out the next three batters to keep the lead intact. (Yankees 3-2)
9th Inning
Evan Marshall entered for Arizona to start the top of the ninth. With the bases loaded, Mark Teixeira came up. Instead of Teixeira driving in an insurance run, Marshall helped out the struggling Teixeira threw a wild pitch that went all the way to the backstop, and Ellsbury scored! The Yankees led 4-2 as Aroldis Chapman entered to start the bottom of the ninth. He retired the Diamondbacks in order to give the Yankees the 4-2 win!
Next Game: Thursday, May 19: Yankees (Ivan Nova) @ Athletics (Kendall Graveman)