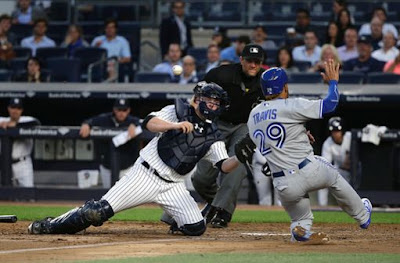 The Blue Jays, dead-last in the American League East entering Wednesday’s game, took out Ivan Nova (3-2, 3.65 ERA) at the right time and hit Nova’s replacement, Chasen Shreve, hard to secure their 8-3 win over the Yankees in The Bronx.

The Yankees were able to load the bases with none out to start the bottom of the third. However, Jacoby Ellsbury's fly ball was too shallow; with one out wasted, Brett Gardner helped the Yankees cash in with a RBI fielder’s choice to second. 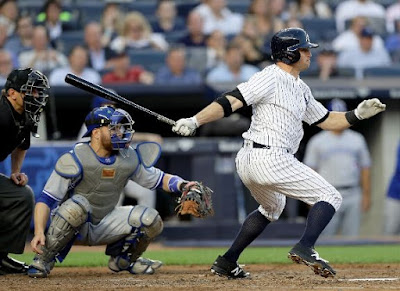 The Blue Jays rallied in the top of the fourth with two runs on a Ryan Goins double. With runners on first and second with two outs, Goins’s double was fielded and cut off in the right center gap by Carlos Beltran (Kevin Pillar scored easily from second), who threw to Didi Gregorius, the cut-off man, but Brian McCann could not field Gregorius’s throw to home, which allowed Devon Travis to score from first. Russell Martin homered to left in the sixth inning to extend the Toronto lead to 3-1. 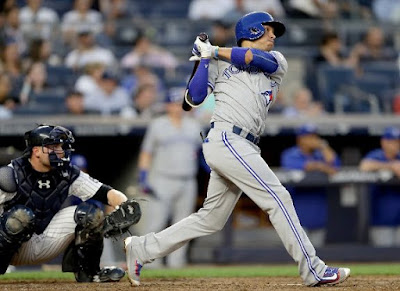 Toronto’s Marco Estrada (2-2, 2.76 ERA) pitched well as he worked his way out of trouble and kept the Yankees off the board in the fourth thru sixth innings. In the top of the seventh, Nova was taken out after hitting Edwin Encarnacion with a pitch. Chasen Shreve entered and his first batter, Michael Saunders, drilled a line drive home run to right and added two key insurance runs, stretching the lead to 5-1. Two batters later, Russell Martin hit his second homer of the night to right to make it 7-1.

Chase Headley and Didi Gregorius hit back-to-back solo home runs in the bottom of the seventh to cut into the Toronto lead, but in the top of the eighth, Edwin Encarnacion’s RBI single to make it 8-3 Toronto off of Nick Goody essentially erased any chance of a Yankees comeback. Austin Romine added a solo home run off of Chad Girodo to cut the Toronto lead to 8-4.

Injury Updates: Alex Rodriguez homered in his second and final at-bat for Double-A Trenton, drilling a 2-run homer to dead center. He is expected to return to the Yankees tomorrow. Mark Teixeira, meanwhile, sat out today's game and is day-to-day with neck spasms.