By Unknown - May 31, 2016
Pulled too soon? Probably. Three batters after CC Sabathia was pulled due to a Edwin Encarnacion leadoff double in the seventh, Kevin Pillar put Toronto ahead 2-1 with a ground ball single through the right side on a 0-1 fastball. The next batter, Darwin Barney added on a 2-RBI single to extend the Toronto lead to 4-1 and to seal the deal for the Blue Jays. 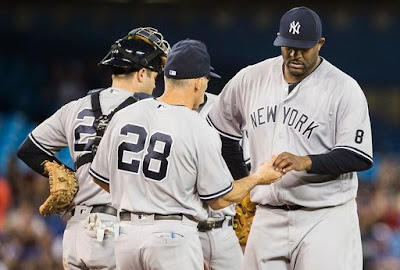 
Dellin Betances, who has been reliable most of the time this season, gave up two huge singles in the seventh that led to Toronto’s 4-1 win on Tuesday night. Yankees manager Joe Girardi pulled Sabathia in favor of him, and it did not work. Betances continued to struggle in scenarios where he comes in with runner(s) on base. 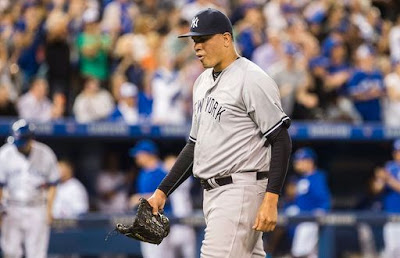 Although CC Sabathia (3-4, 2.85 ERA) entered tonight's start with a 0.45 ERA in the month of May, he was unable to capture the win. Sabathia was charged with the loss, despite the go-ahead run being scored with Betances on the mound; CC threw six innings today, and allowed just five hits and two earned runs, while striking out four.

Aaron Hicks kicked off the scoring by beating out a fielder’s choice grounder to second. Toronto tied the game in the bottom of the 4th with a Justin Smoak home run.

Mark Teixeira stayed cold, going 0 for 4 at the plate today. Chase Headley continues to hit well, and he went 2 for 4 today to raise his batting average up to .236. However, as a team, the Yankees went 1 for 8 with runners in scoring position and left seven men on base.