By Unknown - May 12, 2016
After a tough loss last night to the Royals, the Yankees looked to win the series on Thursday night. The Yankees sent Nathan Eovaldi to the hill to face the former Yankee, Ian Kennedy, of the Kansas City Royals. Chase Headley came into this game with an RBI each in the last two games, and looked to build on that streak entering today. The three dominant pitchers in the Yankees bullpen all rested last night and will all be available today. Before today’s game, the Yankees optioned Ben Gamel, and his fantastic flow, to Scranton, and called up an extra pitcher in Tyler Olson. 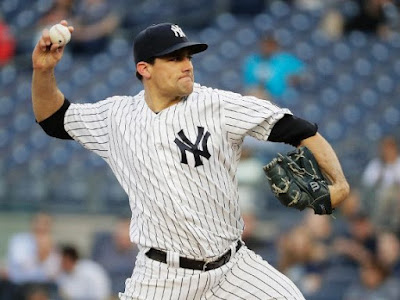 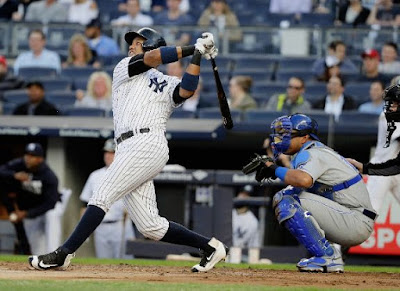 Picture Credit: Al Bello/Getty Images
2nd Inning
The Royals went down in order. Then, with Carlos Beltran on first and two outs, Chase Headley came up and went opposite field and homered to left! His first extra base hit and first home run of the season! This put the Yankees up 3-0 at the end of two innings. (Yankees 3-0)
3rd Inning
Eovaldi ran into trouble after Lorenzo Cain to put runners on first and second with one out. However, Eric Hosmer's sharp ground ball to first was fielded by a diving Mark Teixeira, and Eovaldi got out of the inning without issue. The Yankees went down in order. (Yankees 3-0)
4th Inning
Alex Gordon put the Royals on the board with a solo home run to right. 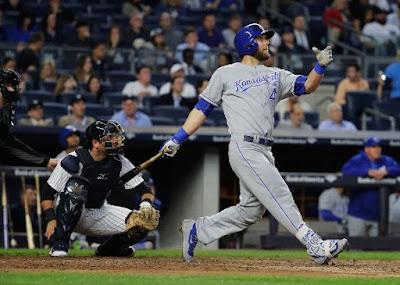 Picture Credit: Al Bello/Getty Images
Then, after Cheslor Cuthbert doubled to right, Christian Colon singled, Cuthbert scored, and the Royals cut the Yankees lead to 3-2. In the bottom half, the Yankees scored two of their own when Didi Gregorius drilled a home run to right to extend the Yankees lead to 5-2. (Yankees 5-2) 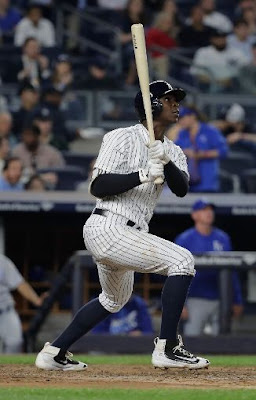 Picture Credit: Al Bello/Getty Images
5th Inning
The Royals did not give up. After two outs, Eric Hosmer doubled and Kendrys Morales walked. The next batter, Alex Gordon, singled to center with the shift on and the Royals cut the Yankees lead to 5-3. Salvador Perez came up and hit a long fly ball to right, but Beltran leaped at the wall and caught it, just before the ball hit the wall. What a catch and the top of the fifth was over. The Yankees went down in order in the bottom of the fifth. (Yankees 5-3)
6th Inning
Kirby Yates entered for Eovaldi and set down the Royals in order. The Yankees did not threaten. (Yankees 5-3)
7th Inning
Dellin Betances entered to start the seventh and retired the Royals in order. After Kennedy walked Headley and Romine singled, Chien-Ming Wang, former Yankees ace, came in. Wang walked Gardner, and then Castro singled to extend the lead to 6-3. Wang struck out the struggling Mark Teixeira looking, but walked Brian McCann. McCann's walk drove in Romine to make it 7-3 Yankees. Wang got Beltran to pop out to end the seventh. This was Wang's first ever appearance against the New York Yankees. (Yankees 7-3)
8th Inning
Andrew Miller came in and retired the Royals in order on ten pitches.Scott Alexander of the Royals entered for Wang to start the eighth, and the Yankees did not threaten. (Yankees 7-3)
9th Inning
Chasen Shreve entered and finished off the game. The Yankees won 7-3!
Next Game: Friday, May 13: White Sox (Chris Sale) @ Yankees (Luis Severino)