By Unknown - May 15, 2016
After losing 7-1 to Chris Sale and the White Sox in the series opener, the Yankees captured Game 2 of this three-game series by a score of 2-1. Ivan Nova pitched brilliantly, throwing 5.2 scoreless innings, before the Yankees bullpen took over. First, Dellin Betances struck out all 4 batters he faced, and then both Andrew Miller and Aroldis Chapman pitched scoreless outings to give the Yankees their 15th win of the season. Today, the Yankees sent Masahiro Tanaka (1-0, 3.11 ERA) to the hill to face Chicago’s Miguel Gonzalez (0-0, 4.91 ERA). The Yankees are trying to capture their third straight series win and complete the home stand on a high note. 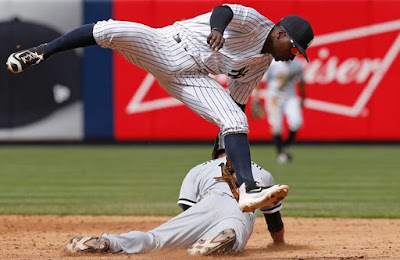 Winning Pitcher: Dellin Betances (1-2, 2.60 ERA) - 1.0 IP, 3 H, 1 ER, 2 K
Losing Pitcher: Matt Albers (1-2, 2.60 ERA) - 1.0 IP, 2 H, 1 ER, 1 BB
Save: Aroldis Chapman (3, 2.25 ERA)
1st Inning
Masahiro Tanaka worked an easy 1-2-3 inning to begin the afternoon. In the bottom half of the inning, Jacoby Ellsbury singled in his first at bat since returning from a hip injury back on May 6th. Brett Gardner singled which moved Ellsbury over to third. Carlos Beltran then hit a sacrifice fly which scored Ellsbury. (Yankees 1-0)
2nd Inning
Tanaka surrendered back-to-back one out walks before Avisail Garcia hit an RBI single to left. He then struck out both Alex Avila and Tyler Saladino to end the threat. Ackley, Gregorius, and Torreyes went down in order for the Yankees. (Tied 1-1)
3rd Inning
Adam Eaton led off the inning with a solo blast into the bullpen in center field. Tanaka worked around a two out walk and a Melky Cabrera double by striking out Brett Lawrie for his 6th K of the afternoon. Brett Gardner hit a one out single followed by back-to-back walks to Carlos Beltran and Mark Teixeira. Starlin Castro hit a 2-out RBI single and then Dustin Ackley walked which brought in a run. 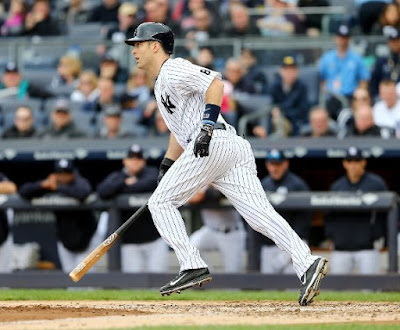 Picture Credit: Elsa/Getty Images
Didi Gregorius grounded out to end the Yankee threat. (Yankees 3-2)
4th Inning
Avisail Garcia led off the inning with a single and stole second base. A single from Tyler Saladino put runners on the corners with one out. Adam Eaton pulled off a safety squeeze bunt which scored Garcia and tied the game. Austin Jackson was the next batter and he ripped a run-scoring single to center. In the bottom half of the inning, Brett Gardner drew a 2-out walk and stole second base for the second time of the day. Carlos Beltran then grounded out to second which ended the inning. (White Sox 4-3)
5th Inning
Masahiro Tanaka worked around a single from Todd Frazier and a double from Avisail Garcia to get out of the 5th inning unscathed to keep the deficit at 1. Dan Jennings came in to pitch for the White Sox with two outs in the inning. An opposite field single from McCann and a walk to Ackley was the only offense the Yankees would muster in the 5th and no one runs scored. (White Sox 4-3)
6th Inning
Kirby Yates came on to pitch for New York in the 6th, marking the fifth consecutive game a Yankees starter failed to make it through 6 innings. He retired the Sox on 9 pitches thanks to an incredible tag by Didi Gregorius on a Tyler Saladino stolen base attempt. Zach Duke relieved Dan Jennings in the bottom half of the inning. Jacoby Ellsbury reached on a throwing error by Brett Lawrie before Carlos Beltran hit his 400th home run of his career, a two run shot that put the Yankees back out in front. (Yankees 5-4) 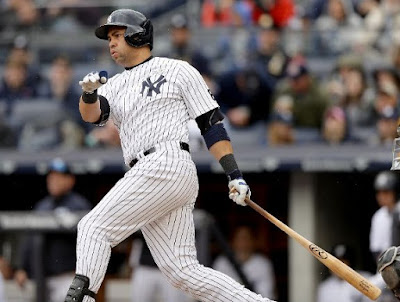 Picture Credit: Elsa/Getty Images
7th Inning
Dellin Betances started the inning for the Yankees. He gave up consecutive singles to Jose Abreu and Todd Frazier. Ex-Yankee Melky Cabrera then lined a run scoring double down the left field line to tie the game at 5 with no outs. Dellin got out of the jam with a ground out and back-to-back strikeouts. Matt Albers came in to work the 7th. After two quick outs, Gregorius drew a walk and Chase Headley pinch hit for Ronald Torreyes. He ripped a huge RBI double, his first of the season, giving the Yankees the lead. Carlos Beltran grounded out with bases loaded to end the inning. (Yankees 6-5) 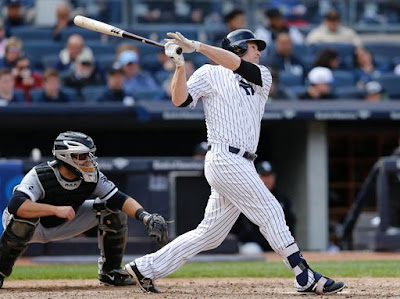