By Unknown - May 08, 2016
The Yankees are trying to claw their way back into relevance in the American League East division race, but several injuries are getting in the way. CC Sabathia, Alex Rodriguez, Starlin Castro, and Jacoby Ellsbury have all had injuries; thankfully, minor ones such as the one with Brett Gardner were resolved quickly. However, the aforementioned four players are still not back yet, so we’ve compiled a list of injury updates for all of you so you can view them at one place. 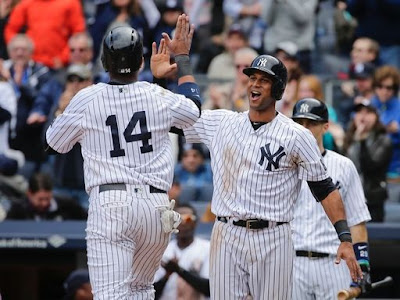 Before Sunday's game against the Boston Red Sox at home, Wallace Matthews of ESPN (@ESPNNYYankees) mentioned that Yankees manager Joe Girardi has stated that Ellsbury is still a few days away from returning, as he has not done anything baseball-related since suffering a hip strain on May 6 in the first inning.

Jacoby Ellsbury is "sore," according to Joe Girardi, but there is no plan to put him on the disabled list at this time.
— Bryan Hoch (@BryanHoch) May 7, 2016

Starlin Castro felt something in his ribcage on the dive back to third. Girardi said he's hopeful he can play tomorrow.
— Bryan Hoch (@BryanHoch) May 9, 2016

CC Sabathia - Put on 15-day DL for a strained left groin on May 6, retroactive to May 5


CC Sabathia said that he doesn't feel like his groin strain is severe. He will play catch; believes he can return in the minimum 15 days.
— Bryan Hoch (@BryanHoch) May 7, 2016