By Unknown - May 06, 2016
What a way to start off the weekend. Earlier today, at 2:21 PM ET, the Yankees PR Department broke Yankees Twitter by tweeting that CC Sabathia had been placed on the DL. Coming off his best outing of the season, this is a huge loss for the Yankees. Yankees manager Joe Girardi talked to the media, and said that Sabathia will hopefully only miss three weeks. 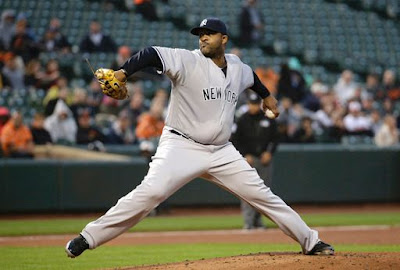 Picture Credit: Associated Press/Patrick Semansky
I was absolutely shocked. I saw no sign of injury when Sabathia pitched on Wednesday. He was brilliant, pitching seven shutout innings against a dangerous Baltimore Orioles lineup, limiting them to just six hits as he struck out six batters. Wednesday’s game was Sabathia’s first outing that he pitched seven or more innings in and did not allow an earned run since April 7, 2013 (73 starts ago; 1033 days). He is undoubtedly the #2 pitcher in the rotation, after Masahiro Tanaka, and has been very consistent this season. This season, he owns a 2-2 record, with a 3.81 ERA, and has allowed 31 hits in 28.1 innings, while striking out 21. Not great numbers, but in the end, he is supposed to be the Yankees #5 starter. This injury is a major problem, because this leaves Tanaka as the only serviceable starter, while the rest of the rotation is a complete mess. Lastly, Sabathia's contract only vests if CC suffers a shoulder injury, so this does not apply here as he has a left groin injury right now.


With the corresponding roster move, the Yankees signed Phil Coke to a MLB contract and selected him to the 25-man roster. 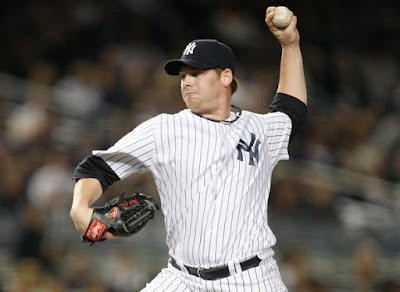 Picture Credit: Getty Images/Jared Wickerham
At the beginning of Spring Training this season, Phil Coke signed a minor league deal with the Atlanta Braves, but was released on March 26. On April 10, he signed with the Lancaster Barnstormers of the Atlantic League of Professional Baseball, but on April 25, the Yankees acquired him from Lancaster and sent him to Triple-A. Since then, he has pitched to a 2-0 record in seven innings, allowing zero earned runs (one unearned), three hits, two walks, and had struck out eight. Presumably, Phil Coke will fill in as a middle reliever, before a long relief pitcher in the form of Luis Cessa or Chad Green is called up to replace Ivan Nova’s spot in the bullpen, as Nova will most likely move from the long relief role into the rotation and take over CC Sabathia’s spot.

Phil Coke was drafted by the Yankees in the 26th round in the 2002 MLB Draft. He was previously drafted by the Florida Marlins in 2001, but did not sign. In September of 2008, he made his MLB debut and was on the 2009 Yankees team that won the World Series. In 2009, he made 72 appearances, pitching to a 4-3 record with a 4.50 ERA, while striking out 49 in 60 innings. He was eventually traded to the Detroit Tigers in the Curtis Granderson deal, and spent five seasons there. Most notably, in 2012, he pitched against the Yankees in the 2012 ALCS, earning a save in Game 2 by pitching 2 scoreless innings, and then got the save in Game 3. He was dominant in the 2012 postseason, striking out 13 in 10.2 innings, while allowing just one run. However, Coke struggled last season in 2015, bouncing around with the Chicago Cubs, Toronto Blue Jays, and in the minors.

Coke features a 4-seam fastball, 2-seam fastball, and a changeup that he used more than any other pitch in 2012. He also has a slider and changeup that was increasingly featured in 2013 and 2014. Coke will fit into the Yankees bullpen as a middle reliever, and will most likely pitch in low-leverage situations, behind Johnny Barbato and Chasen Shreve. Look for the Yankees to send him down when Aroldis Chapman comes up.