By Unknown - May 26, 2016
After the Yankees 3-1 loss today to the Toronto Blue Jays, the team announced the unconditional release of OF Slade Heathcott, per Chris Cotillo (@chriscotillo on Twitter). With the call-up of Richard Bleier, there were 41 players on the 40-man roster for the Yankees, so either someone would have to go from the 15 to 60-day DL, or be designated for assignment. Unfortunately for Heathcott, he was released. 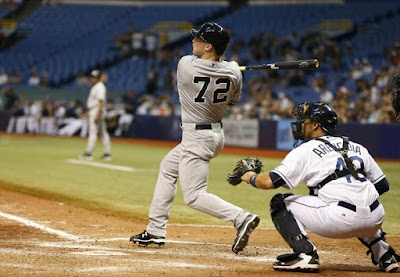 According to Chad Jennings (@lohudyankees), the Yankees do not plan on re-signing Slade Heathcott. The organization has several outfielders who are nearly MLB-ready in the Minors. Aaron Judge is the first name to come to mind, but right behind him are Ben Gamel (who’s already played for the Yankees this season), Jake Cave, and Dustin Fowler. Mason Williams is also expected to be back in a couple of months from a shoulder injury.

Heathcott hit .230 at Triple-A Scranton this season, and was, as of today, on the 7-day Minors disabled list for a knee injury. In 2015, Heathcott was called up to the Yankees twice, once in May and once in September and hit .400 in 25 at-bats with two homers and eight RBIs. Many believed he was a candidate to make the roster straight out of Spring Training this year, but he went 1-for-22 (.045) and struck out nine times. On March 17, during Spring Training this season, he missed the team bus to an away game, which hurt his chances even more to make the Opening Day roster.

Here at the BBB, we wish Slade Heathcott best of luck in his future.