By NYY v BOS - May 29, 2016
I'm subbing in to write the recap in an emergency capacity folks so this one is going to be short and sweet. I typically don't find pitching duels that entertaining, but this one was a treat. This game at Tropicana Field featured Yankee starter Nathan Eovaldi against Jake Odorizzi and both were on top of their game this afternoon.

Eovaldi and Odorizzi exchanged zeroes until the bottom of the third inning. Eovaldi allowed a sharp single up the middle from Brandon Guyer that Starlin Castro couldn't quite corral with one out. After a groundout to first, Guyer moved to second and two outs were on the board. The wheels then started coming off, as a wild pitch allowed Guyer to move to third, then Evan Longoria knocked him in with a single to right. Eovaldi wouldn't allow another run after that. 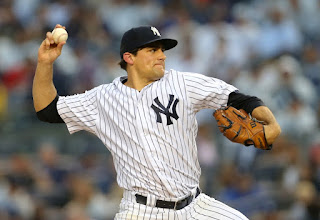 In the bottom of the 5th, an error by Starlin Castro led to runners on second and third, but Eovaldi buckled down to escape unscathed.

Meanwhile, opposing starter Jake Odorizzi was throwing a perfect game against the Yankees until the top of the 6th. With one out, Dustin Ackley lined one sharply to shortstop Brad Miller and beat the throw to first. To most people, it was a pretty clear cut base hit. However, the home scorer gave Miller a very questionable error to instead preserve the no hitter. Odorizzi would then get out of the inning without allowing another baserunner.

In the bottom of the 6th, Eovaldi danced in and out of danger when he allowed two singles and a walk to load the bases, but again tightened it down and escaped by getting two consecutive pop ups to end the inning.

The top of the 7th is where the fun for Yankees fans took place. Odorizzi, still throwing a no hitter, walked Brett Gardner with one away to bring up Starlin Castro. After falling behind 1-0 in the count, Odorizzi piped one right down the middle of which Castro walloped and deposited beyond the fence in center field. This home run ruined not only the no hitter, but also the shut out, and gave the Yankees a 2-1 lead.

The game was over from there, as "No-Run DMC" came in and Betances, Miller, and Chapman each came in and retired every batter they faced and combined for seven strikeouts.

This was a big win for the Yankees and it pulled them to only one game under .500 and just 5.0 games back of the division lead. They're 7-3 in their last 10 and will now head to Toronto to face off against the Blue Jays.

Because of his gritty work and ability to buckle down and keep the Yankees in the game despite the lack of offensive support, Nathan Eovaldi takes today's game MVP Award.