By Unknown - May 20, 2016
The Yankees came into Thursday’s series opener with the Oakland Athletics looking to build off of the momentum from last night’s 4-2 win over the Diamondbacks.  The Yankees sent Ivan Nova (2-1, 3.70 ERA) to the mound, who is coming off perhaps his best start of the season last weekend against the White Sox. He allowed four hits and one earned run in 5.2 IP. Over his previous two starts, Ivan Nova has surrendered only two runs over 10.1 innings. The Oakland Athletics countered with Kendall Graveman (1-5, 5.84 ERA), a 25 year-old RHP, who has found himself in the midst of a rocky start to the 2016 campaign. In his last start, he was chased in the third inning after giving up 6 runs to the Baltimore Orioles. The Yankees were swept by Oakland in New York back in March. 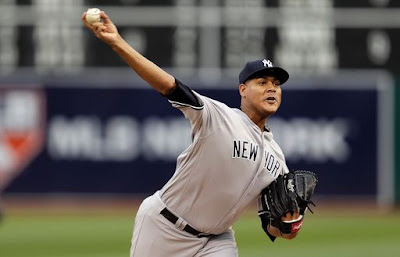 Winning Pitcher: Ivan Nova (3-1, 3.26 ERA) - 6 IP, 4 H, 1 ER, 0 BB, 3 K
Losing Pitcher: Kendall Graveman (1-6, 5.48 ERA) - 5.2 IP, 8 H, 2 ER, 3 BB, 5 K
Save: Aroldis Chapman (5, 1.50 ERA)
1st Inning
Jacoby Ellsbury led off with a single against Kendall Graveman. Brett Gardner reached on a fielder’s choice before stealing second base, his 8th steal of the season. Carlos Beltran and Brian McCann struck out the end the top half of the first. Ivan Nova sent the A’s down in order. (Scoreless)
2nd Inning
Chase Headley ripped a one-out double in the second, but that’s all the Yankees would do. Oakland mustered their first hit of the ballgame, a single by Stephen Vogt, but that too was all they could do in the second inning. (Scoreless)
3rd Inning
After two quick outs to begin the inning, Brett Gardner walked and Carlos Beltran went the other way with an RBI double down the left field line, scoring Gardner. 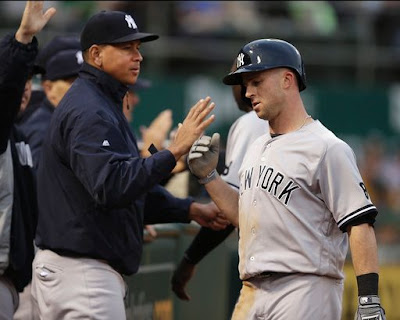 Picture Credit: Associated Press/Ben Margot
McCann reached on a fielding error moving Beltran to third but Starlin Castro lined out to end the threat. Ivan Nova set the Athletics down in order. (Yankees 1-0)
4th Inning
Kendall Graveman retired the Yankees in order. In the bottom half of the inning, Josh Reddick clubbed a one-out solo home run to right field, tying the game at 1. Danny Valencia followed with a single, but Khris Davis grounded into a double play to end the inning. (Tied 1-1)
5th Inning
Jacoby Ellsbury was hit by a pitch to the begin the inning, marking eight consecutive plate appearances that he had reached base. Brett Gardner singled and Brian McCann walked with two outs to load the bases. However, Starlin Castro grounded out to end the inning and the Yankees were 0-7 with RISP through the first 5 innings. Stephen Vogt led off the bottom half of the inning with a single, his second of the game. However, Yonder Alonso grounded into a double play and Marcus Semien grounded out to end the inning. (Tied 1-1)
6th Inning
The Yankees had baserunning issues in the 6th. Chase Headley led off with a single before getting picked off first base by Graveman. After a Dustin Ackley single, Didi Gregorius singled to right field but was thrown out at second trying to advance on Josh Reddick’s throw to third. However, Aaron Hicks's double to left scored Ackley, and the Yankees took the lead, 2-1. 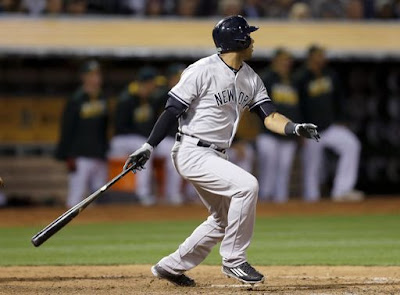 Picture Credit: Associated Press/Ben Margot
Marc Rzepczynski came on to relieve Kendall Graveman and retired Jacoby Ellsbury. Ivan Nova went out for his 6th inning of work and continued to roll, setting the A’s down in order. (Yankees 2-1)
7th Inning
Brett Gardner singled to lead off the inning but that’s all the Yankees would get off of Rzepczynski. Dellin Betances came in to relieve Ivan Nova, who needed only 62 pitches to get through 6 innings of work. Dellin gave up a leadoff single to Josh Reddick but retired Valencia, Davis, and Stephen Vogt in order to preserve the Yankees lead. (Yankees 2-1)
8th Inning
John Axford came in to pitch the 8th inning for the Athletics and worked an easy 1-2-3 inning. Andrew Miller came on to relieve Betances and retired the Athletics in order. (Yankees 2-1)
9th Inning
Fernando Rodriguez came in to relieve John Axford. Brett Gardner drew a two-out walk before Carlos Beltran belted a two-run shot to right field to extend the Yankees lead to 4-1. 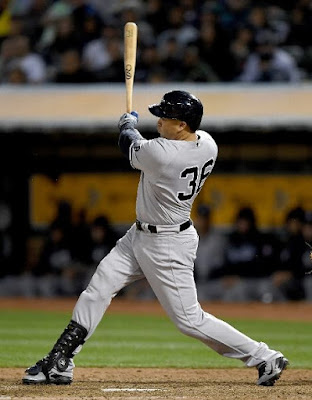 Picture Credit: Getty Images/Thearon W. Henderson
Aroldis Chapman came on for the save. He allowed a leadoff single to Coco Crisp but retired Billy Burns, Tyler Ladendorf, and Danny Valencia in order to close out a victory for the Yankees.
Next Game: Friday, May 20 (9:35 PM ET): New York Yankees (C.C. Sabathia) @ Oakland Athletics (Sonny Gray)