By Unknown - May 07, 2016
Last night, the Yankees won a big series opener against the Boston Red Sox. They came out on top 3-2 after Aaron Hicks homered in the 7th to give the Yankees the lead. In the dramatic 9th inning, both David Ortiz and Red Sox manager John Farrell were tossed after home plate umpire Ron Kulpa made two questionable strike calls against Boston. Andrew Miller delivered with a clutch four-out save to give the Yankees their first win against their rivals this season. Today, Nathan Eovaldi came to the mound looking to throw a better game than he did in his last outing at Boston and he faced off against Red Sox ace David Price. 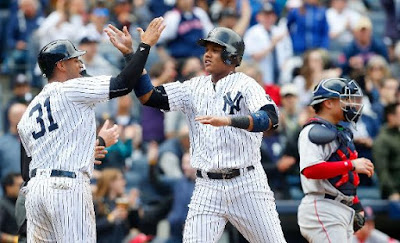 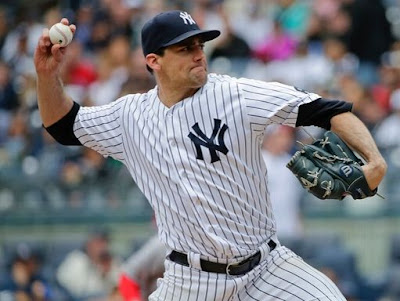 Picture Credit: Associated Press/Frank Franklin II
2nd Inning
Hanley Ramirez was hit by a pitch after David Ortiz struck out. Travis Shaw grounded out softly moving Ramirez to second, and Brock Holt followed with a single to score Ramirez and put the Red Sox on top 1-0. The Yankees went down in order. (Red Sox 1-0)
3rd Inning
The Red Sox went down in order. Chase Headley singled to lead off the inning and Didi Gregorius put down a sacrifice bunt to move him to second. Austin Romine took advantage of the runner on second and doubled to right center to score Headley and tie the game 1-1. (Tied 1-1)
4th Inning
Hanley Ramirez singled with two outs but nothing came of it as Eovaldi struck out Travis Shaw. Starlin Castro and Mark Teixeira led the inning off with back to back singles. Beltran struck out, and Dustin Ackley walked to load the bases with one out. Chase Headley flew out on a weak fly ball to right, so Castro couldn’t tag. However, Didi Gregorius came through as he hit a big double down the right field line to score all three runners. 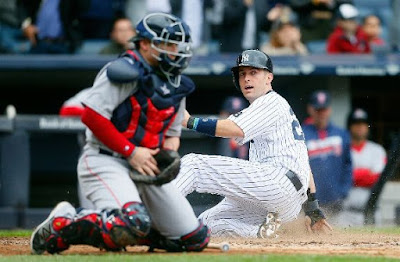 Picture Credit: Getty Images/Jim McIsaac
Gregorius was able to get to third on the throw to home. The Yankees went on top 4-1. (Yankees 4-1)
5th Inning
Jackie Bradley, Jr. answered with a solo home run to cut the Yankees lead to 4-2, but they were unable to get anything else in the inning. Aaron Hicks and Starlin Castro walked with one out and Mark Teixeira struck out to bring up Beltran who doubled down the left field line to score both runners and put the Yankees up 6-2. Matt Barnes replaced David Price after Price went only 4.2 innings. (Yankees 6-2) 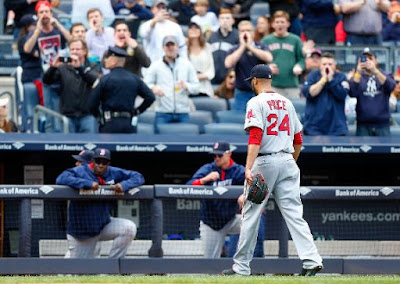 Picture Credit: Getty Images/Jim McIsaac
6th Inning
The Red Sox couldn’t answer back in the top of the 6th. Didi Gregorius singled on a check swing with one out followed by an Austin Romine broken bat single to move Didi to second. Brett Gardner walked on four pitches to load the bases. Aaron Hicks lined out to right, but Didi was able to score and Romine tagged to third. The Yankees extended their lead 7-2. Castro flied out to end the inning. (Yankees 7-2)
7th Inning
The Red Sox and the Yankees both went down in order. (Yankees 7-2)

8th InningThe Red Sox went down in order again this inning. Sean O’Sullivan came in for the Red Sox to start the bottom of the eighth. After a Chase Headley single and a Didi Gregorius flyout, Austin Romine doubled to deep left and the Yankees added an eighth run to extend their lead to 8-2! (Yankees 8-2)
9th Inning
Nick Goody entered for Eovaldi after Nasty Nate delivered eight brilliant innings this afternoon. Goody completed the inning without issue, and the Yankees won Game 2 by a score of 8-2!
Next Game: Sunday, May 8: Red Sox (Steven Wright) @ Yankees (Luis Severino)