Sabathia returns from DL, Torreyes and Beltran combine to drive in 5 runs in 8-3 win over Athletics

By Unknown - May 21, 2016
Last night, the Yankees came out on top with a 4-1 win over the Athletics. Ivan Nova looked great through 6 innings and the three-headed monster in the bullpen, with Betances in the 7th, Miller in the 8th, and Chapman in the 9th was able to finish it off. CC Sabathia returned from the DL today to face off against Sonny Gray in game 2 of the series. The Yankees looked to keep winning and get back on track after a very slow start to the season. 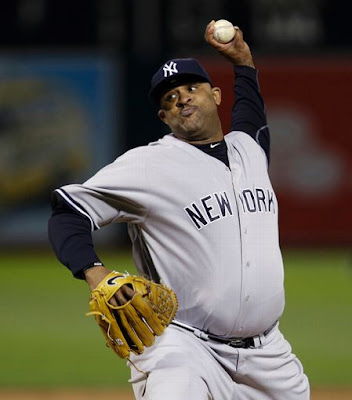 Winning Pitcher: CC Sabathia (3-2, 3.41 ERA) - 6.0 IP, 3 H, 1 ER, 1 BB, 8 K
Losing Pitcher: Sonny Gray (3-5, 6.19 ERA) - 3.1 IP, 6 H, 5 R (4 ER), 4 BB, 3 K
1st Inning
With 2 outs, Carlos Beltran doubled and Brian McCann hit a hard single to left, but Beltran was only able to advance to third on McCann's single. Mark Teixeira flew out to end the top of the first. The Athletics went down in order. (Scoreless)
2nd Inning
Didi Gregorius singled with two outs, but Ronald Torreyes struck out to end the inning. Billy Butler walked with one out and Stephen Vogt was hit by a pitch. After Jake Smolinski lined out, Matt McBride singled, scoring Billy Butler, and Oakland led 1-0. (Athletics 1-0)
3rd Inning
Jacoby Ellsbury walked, but was out at second on a fielder’s choice and Brett Gardner took his place at first. Carlos Beltran then grounded into a fielder’s choice and took Gardner’s place at first with 2 outs. After Brian McCann walked, Beltran advanced to third on a wild pitch. However, the struggling Mark Teixeira struck out swinging to end the inning. The Athletics got runners on first and third but couldn’t get a run across. (Athletics 1-0)
4th Inning
With one out, Aaron Hicks walked and Didi Gregorius singled to move him to third. Then, Ronald Torreyes tripled to score both Hicks and Gregorius and the Yankees led 2-1. 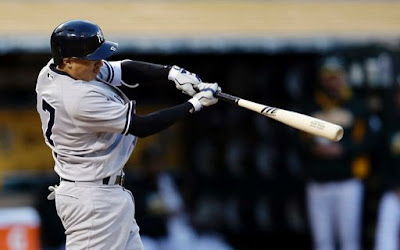 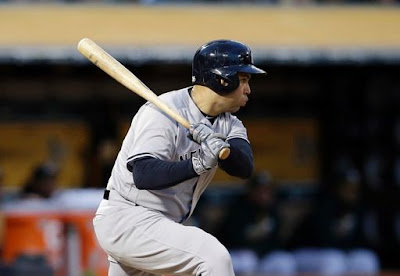 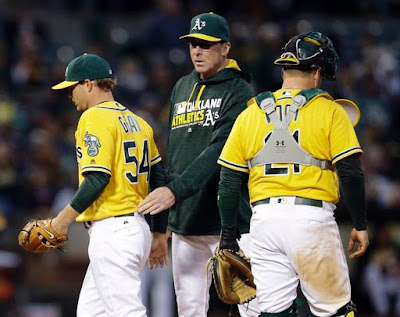 Picture Credit: Marcio Jose Sanchez
The A’s went down in order. (Yankees 5-1)
5th Inning
Starlin Castro and Aaron Hicks reached to lead off the inning but the Yankees couldn’t get another run across. CC retired the Athletics in order again. (Yankees 5-1)
6th Inning
Brett Gardner singled to lead off the inning and scored on Beltran’s double to make the score 6-1. The A’s were unable to get anything across. (Yankees 6-1)
7th Inning
Torreyes walked and Ellsbury singled to move him to second, but the Yankees could not score. Kirby Yates replaced CC Sabathia after six strong innings of work. After Tyler Ladendorf singled with two outs and none on, Coco Crisp doubled to scored Ladendorf and cut their deficit to four runs. (Yankees 6-2)
8th Inning
The Yankees were set down in order by Andrew Triggs. Kirby Yates set down the Athletics in order as well. (Yankees 6-2)
9th Inning
After Didi Gregorius and Ronald Torreyes hit consecutive singles with two outs, Jacoby Ellsbury tripled, scoring both Gregorius and Torreyes. Chasen Shreve entered to start the ninth. After a Billy Burns leadoff triple, Jake Smolinski's RBI groundout scored Burns. Shreve didn't encounter further trouble and the Yankees won, 8-3, and had their first three-game winning streak of the season!
Next Game: Saturday, May 21 (4:05 PM ET): Yankees (Masahiro Tanaka) at Athletics (Sean Manaea)