By Unknown - May 21, 2016
The Yankees earned their first three game win streak of the season last night after a 8-3 victory over the Athletics last night in Oakland. CC Sabathia picked up the win for the Bronx Bombers in his first start off the DL, besting Oakland’s Sonny Gray. Today’s game saw Masahiro Tanaka against the southpaw Sean Manaea, who came into today’s game toting a hefty 7 plus ERA. Tanaka has struggled in his last two outings, but the Yankees offense led by the suddenly red-hot Jacoby Ellsbury should tee off on the Athletics once again. 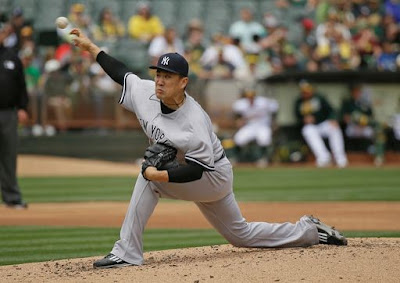 Saturday May 21, 2016: New York Yankees 5 @ Oakland Athletics 1
Winning Pitcher: Masahiro Tanaka (2-0, 3.24 ERA) - 7.0 IP, 5 H, 1 ER, 2 BB, 4 K
Losing Pitcher: Sean Manaea (1-2, 7.62 ERA) - 6.2 IP, 6 H, 5 ER, 2 BB, 4 K
1st Inning
Both teams went down 1-2-3. (Scoreless)
2nd Inning
The Yankees once again went down in order. Oakland picked up the first hit of the game on a Marcus Semien single, but Tanaka was able to retire Chris Coghlan to end the frame. (Scoreless)
3rd Inning
Rob Refsnyder lined out hard to second base in his first AB of the 2016 campaign, and once again, Sean Manaea retired the Yankees in order. Tanaka gave up three straight singles to load the bases with one out but struck out Danny Valencia and Khris Davis grounded out to third. Tanaka buckled down there and worked around the jam. (Scoreless)
4th Inning
The Yankees drew first blood in this game as with the bases loaded, Carlos Beltran delivered an RBI single to left center, bringing home Jacoby Ellsbury. 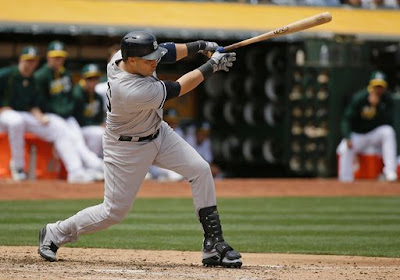 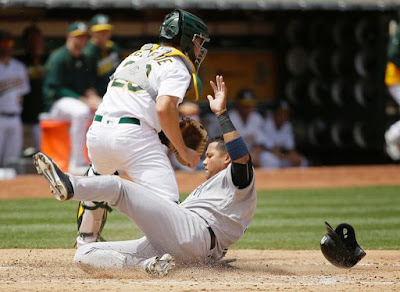 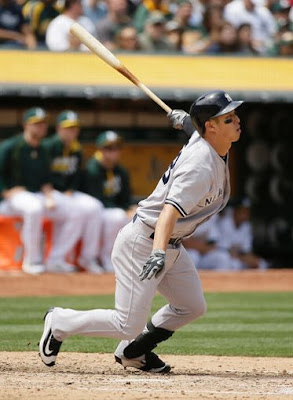 Picture Credit: Associated Press/Eric Risberg
Masahiro Tanaka retired the Athletics in order with a shutdown inning. (Yankees 4-0)
5th Inning
Starlin Castro and Mark Teixeira each recorded 2-out singles but were stranded and New York failed to score. Oakland loaded the bases with one out in the fifth, just like they did in the third. However, this time the Athletics were able to push a run across as Danny Valencia’s sac fly cut the Yankees lead to 4-1.  Tanaka stopped the bleeding by striking out the powerful Khris Davis. (Yankees 4-1)
6th Inning
Yankees bats were quiet as they went down in order. In an effort to not be outdone, Tanaka did the same as he retired the Athletics in order. (Yankees 4-1)
7th Inning
After Ronald Torreyes singled to start the 7th, Starlin Castro doubled to center, scoring Torreyes to extend the Yankees lead to 5-1. Veteran John Axford entered for Manaea and was able to get the last out to prevent any further damage. Tanaka’s solid performance has now turned into a great performance as he sets down the Athletics in order again. (Yankees 5-1)
8th Inning
With two Yankees on base and only one down, the Athletics brought in lefty Mark Rzepczynski. Rzepczynski does his job by getting Gardner and Austin Romine out, and the Yankees failed to score after putting runners on second and third with none out. Tanaka’s day ends as Nick Goody came on to pitch the eighth. Goody does a good (see what I did there) job, retiring the Athletics in order. (Yankees 5-1)
9th Inning
Sean Doolittle entered to start the ninth for Oakland and didn’t encounter much trouble. Nick Goody worked a second scoreless inning and the Yankees won, 5-1!
Next Game: Sunday May 22, 2016 (4:05 PM EDT) - Yankees (Michael Pineda) at Athletics (Jesse Hahn)
Article by: Matt Cote (@mcote31)
Follow the BBB @bronxbomberblog
Aaron Hicks Carlos Beltran Masahiro Tanaka Matt Cote Nick Goody Oakland Athletics Recap Rob Refsnyder Starlin Castro