Timely hitting from Teixeira, Castro guides Yankees to sweep of Athletics with 5-4 win 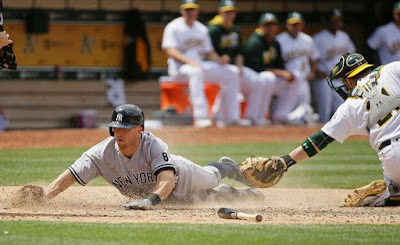 Photo Credit: Associated Press/Eric Risberg
It took Brett Gardner’s speed and awareness to happen, but in the 6th inning, Mark Teixeira’s first single in 20 at-bats tied the game at 3. Although it was an infield single with the shift on, the grounder to shallow right field was enough to score Gardner, who ran on contact from second with two outs. Starlin Castro followed Teixeira with a RBI single to center off of Oakland's Jesse Hahn and the Yankees took the lead for good, 4-3.


Oakland got on the board in the first with Billy Burns’s speed. Burns stole two bases and scored on Stephen Vogt’s groundout. 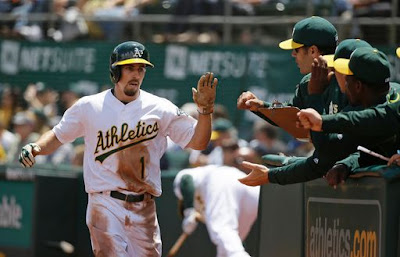 Photo Credit: Associated Press/Eric Risberg
Michael Pineda then settled down, working out of trouble in the second and third innings.

In the fifth, Pineda ran into trouble. After a Billy Burns single with two outs to put runners on first and second, Stephen Vogt woke up O.co Coliseum with a two-run double to left, giving the Athletics the 3-2 lead. However, the joyous times in Oakland didn’t last long, as the Yankees added two runs on two RBI singles by Teixeira and Gardner to take the 4-3 lead in the sixth. 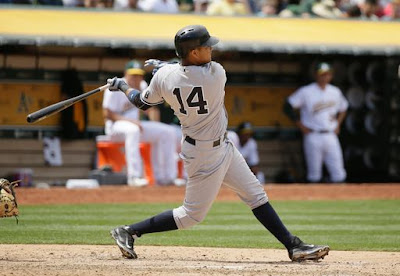 
Carlos Beltran added an insurance run with a RBI double in the 7th, and the Yankees needed that run. With Andrew Miller pitching, Didi Gregorius and Starlin Castro made consecutive errors on routine grounders to start the bottom of the 8th, and the Athletics cut the Yankees lead in half with a Billy Butler RBI groundout.

The dominant Yankees bullpen came in for the last three innings. Dellin Betances worked a perfect seventh, Miller limited the damage to just one run, and Aroldis Chapman worked a 1-2-3 ninth to secure the win for the Yankees.