By Unknown - May 03, 2016
Over the weekend, the Yankees were swept by the Boston Red Sox at Fenway Park. On Friday, Tanaka could not keep a 2-0 lead, and then David Ortiz drilled a two-run shot off of Dellin Betances to lead Boston to a 4-2 win. On Saturday, the Red Sox shut out the Yankees, and then on Sunday, Christian Vazquez sent a Dellin Betances fastball over the Green Monster in left, breaking a 6-6 tie, to lead Boston to the series sweep. Today, the Yankees started a three-game series in Baltimore. Luis Severino, who has been struggling all year, faced off against Baltimore’s Chris Tillman, who struck out nine Tampa Bay Rays batters in his previous start. The Yankees offense continued to struggle over the weekend in Boston, but it did show some signs of life, scoring seven runs on Sunday night. 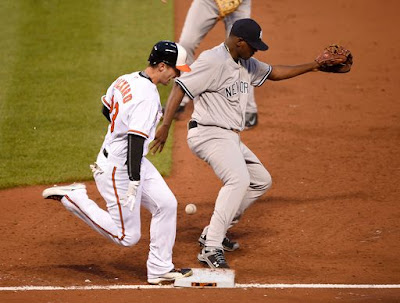 Winning Pitcher: Chris Tillman (3-1, 2.81 ERA) - 7.0 IP, 5 H, 1 ER, 4 BB, 9 K
Losing Pitcher: Luis Severino (0-4, 6.31 ERA) - 6.0 IP, 5 H, 4 R (3 ER), 2 BB, 4 K
1st Inning
Brett Gardner doubled with one out, but the Yankees could not bring him home. Manny Machado walked with one out, but Baltimore could not score. (Scoreless)
2nd Inning
Didi Gregorius got the Yankees on the board with a RBI single to center, scoring Brian McCann. Mark Trumbo quickly tied the game in the bottom half with a deep home run to left. Then, the Orioles loaded the bases, after Luis Severino dropped the toss from Mark Teixeira on a ground ball to first base with two outs, but Manny Machado popped out to end the second. (Tied 1-1) 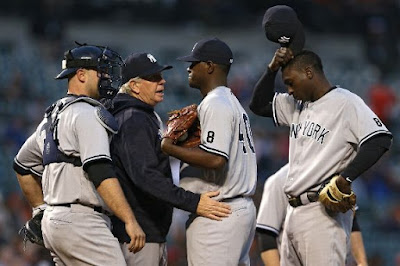 Picture Credit: Getty Images/Patrick Smith
3rd Inning
Brett Gardner walked with one out, but the Yankees could not do anything. The Orioles went down in order. (Tied 1-1)
4th Inning
Brian McCann led off the inning with a walk, but the Yankees did not threaten. After Jonathan Schoop doubled with none on and two outs, Ryan Flaherty grounded the ball to first, Teixeira fielded it, tossed it to Severino, but Severino dropped it again! Schoop scored and the Orioles led 2-1. (Orioles 2-1)
5th Inning
Jacoby Ellsbury singled with one out but nothing came of it. In the bottom of the 5th, Mark Trumbo came up with two outs and Adam Jones on first, and Trumbo homered again! Trumbo’s home run to left, his second of the night, made it 4-1. (Orioles 4-1) 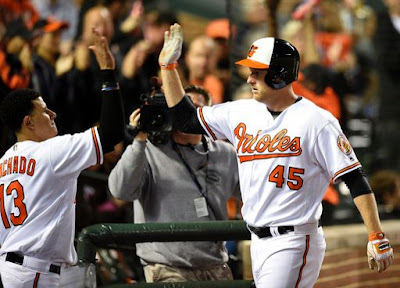 Picture Credit: Associated Press/Nick Wass
6th Inning
Yankees got runners on first and second with none out, but Beltran lined out and Starlin Castro’s line drive was caught, and McCann was doubled off of first. Once again, the Yankees could not produce when given the opportunity. Severino ended his outing by retiring the Orioles in order. (Orioles 4-1)
7th Inning
Chris Tillman struck out the Yankees in order in the seventh. Kirby Yates entered for Severino to start the seventh, and Yates retired the Orioles in order on three ground balls. (Orioles 4-1)
8th Inning
Brad Brach entered to start the eighth. After Gardner grounded out, Dustin Ackley pinch-hit for A-Rod, who may have injured his hamstring running to first base on a ground ball in the fifth inning. Ackley singled, but the Yankees did not threaten in this inning. Johnny Barbato entered in the bottom of the eighth and worked a 1-2-3 inning. (Orioles 4-1)
9th Inning
Darren O'Day entered to start the ninth, with typical closer Zach Britton sidelined with a minor injury. O'Day closed the game out without issue, and the Orioles won 4-1.
Next Game: Wednesday, May 4: Yankees (CC Sabathia) @ Orioles (Tyler Wilson)