Michael Pineda should be immediately demoted to Triple-A

By Unknown - May 31, 2016
Although the Yankees starting rotation was full of questionable marks entering the 2016 campaign, three of the five pitchers in the rotation on Opening Day have become consistent and at times, dominant. CC Sabathia, Masahiro Tanaka, and Nathan Eovaldi have all exceeded expectations and have performed extremely well. However, the same cannot be said for Luis Severino and Michael Pineda. Both have struggled heavily, with the Yankees losing in seven of Pineda’s ten starts this season. Even though the Yankees finally demoted the young Severino to Triple-A on Monday, Michael Pineda is still in line to make his next start on Thursday at Detroit. Given the lack of games the Yankees have won with Pineda starting, how successful batters are against him, and his increasing lack of control with the baseball, Pineda should be sent down to Triple-A to work out his issues. 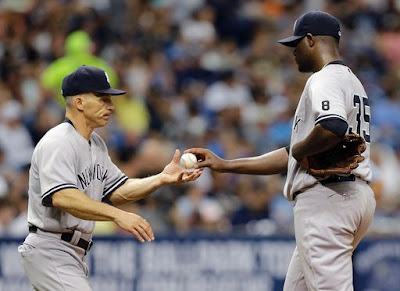 
In 2016, the Yankees have won just three of Pineda’s ten starts and he has not yet recorded an out in the seventh inning this season. The limited lengths of his starts hurt the bullpen and force key middle-relief pitchers, such as Kirby Yates and Nick Goody, to be used up and unavailable in case of a bad start in the next day’s game. In 2014 and 2015 (once each season), the Yankees went through a nine-game stretch of Pineda’s starts where they lost six of those nine starts. However, on May 28 of this season, the Yankees lost their seventh game in Pineda’s last nine starts. But, Pineda pitched relatively well in 2014 and 2015, while in 2016, he has been awful. In 2014, Pineda pitched to a 1.80 ERA in that nine-game stretch, and yet the Yankees still lost six of those starts. In 2015, he showed promise in three consecutive starts, allowing just three earned runs total, but in 2016, the lowest amount of runs he’s allowed in any three consecutive starts in the ongoing nine-game stretch, was 10. Pineda has put the Yankees offense in a hole early and has not given the team many chances to win this season.


Within each start, opposing hitters have also hit Pineda hard. In the first two months of 2016, where he’s pitched 53.1 innings in ten starts, Pineda has already allowed 73 hits. However in April and May 2015, Pineda combined to pitch 64.1 innings in ten starts (showing less length per outing this season), 10.1 more innings than this season, yet allowed only 68 hits. Opponents are hitting an astounding .322 off of him, and are reaching base 37.1% of the time. Last season, batters only hit .278 off of him and reached base only 30.1% of the time. Pineda’s WHIP has increased from 1.23 (2015) to 1.65 this season, and batters are also slugging .581 off of him this season, as compared to .451 last season and .342 in his rookie season in Seattle. Simply stated, opponents are essentially taking batting practice when Pineda is on the mound.


As was previously mentioned, opponents are reaching base 37.1% of the time against Pineda. This is a direct result of his decreasing K/BB ratio, which has gone from 7.43 (2015) to 3.93 this season. In fact, in just 53.1 innings this season, he’s already walked 15 batters. In all of 2015, where he pitched 160.2 innings, he walked only 21 batters. He is on pace to walk 45 batters this season. It’s one thing to give up hits, and it’s another to give them free passes. In 2016, Pineda has had three starts where he’s allowed three or more walks. In 2014 and 2015 combined (40 starts total), he had zero outings where he allowed three or more walks. His command is also an issue that can be worked on in Triple-A in a low-pressure environment, and not in the Majors where he is costing his team a win every time he pitches. 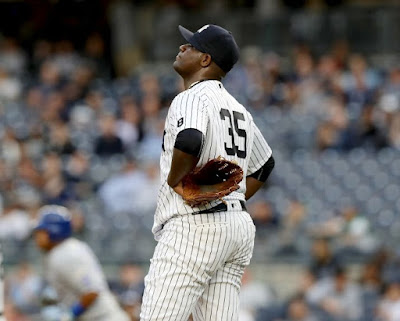 
Lastly, Pineda’s issues with getting out of an inning are well-documented. Last season, opponents hit .227 off of Pineda with two outs. That’s a pretty solid average, and it means he did a decent job of getting out of innings even with runners on. But this season, batters are hitting .452 off of him with two outs, with 8 home runs and thirteen doubles. In fact, opponents have reached base 48 out of the 100 times they have come up against Pineda with two outs. That’s absolutely horrendous.


Let me address two more things: for those wondering if Pineda has an option, yes he does. For those wondering who will replace Pineda, the Yankees have several options in Luis Cessa, Brady Lail, Richard Bleier, and Chad Green. They can’t do much worse than Pineda anyways, and it’s refreshing once in awhile for Yankees fans to see a new face out there achieving his dream to pitch in the Majors.


If you thought Pineda was awful last year, he’s been horrendous and even worse this season. It’s time for the Yankees to send him down to Triple-A and let him work out his issues there. There are several problems with Pineda’s pitching right now, and the problem will grow out of control if he is not sent down now.