By Unknown - May 30, 2016
For the second consecutive time this season, the Yankees offense was silenced by the incredibly efficient Marco Estrada (3-2, 2.43 ERA). Coming off a game in which the entire team produced one hit, the Yankees couldn’t solve Estrada, as the right hander allowed just three hits. Winners of seven of their last ten, the Yankees were incredibly flat in tonight’s 4-2 loss. 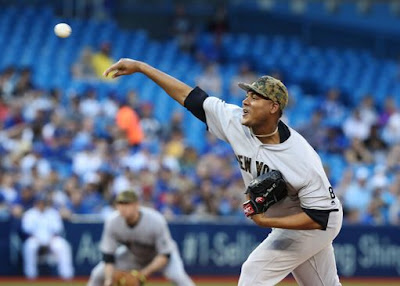 Ivan Nova (3-3, 3.98 ERA) took the mound as he looked to continue his stretch of solid pitching and didn’t pitch terribly, but by no means did he pitch well. The right hander tossed seven innings of four-run ball and was hurt by a high pitch count, highlighted by inefficient innings such as a 27-pitch first. Josh Donaldson roped a single and was later brought in to score by an Edwin Encarnacion double. In the third inning, Ryan Goins, who came in hitting .151, roped a double and scored following a Jose Bautista walk and Encarnacion groundout. Michael Saunders drove in the fourth run of the game with a double that brought in Bautista. 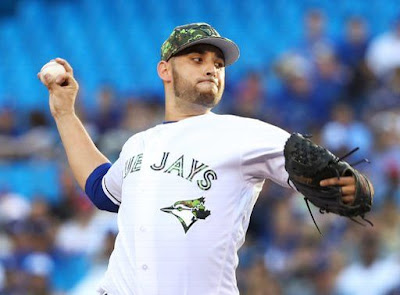 The Yankees didn’t get many chances with RISP, but in the chances they did have, they went 0 for 4. After a Starlin Castro walk and double by Aaron Hicks, Estrada got Jacoby Ellsbury to pop out and end the threat. The Bombers had two innings killed by double plays. However, Brian McCann gave the Yanks a glimpse of hope, as he smashed a two run home run to dead center in the ninth inning, to bring the Yankees within two. After McCann's home run, Mark Teixeira showed life with a one-out double, but Starlin Castro flied out and Chase Headley struck out to end the game.

Nick Goody relieved Ivan Nova in the 7th inning and did well, striking out Jose Bautista and Edwin Encarnacion. Richard Bleier made his MLB debut in the bottom of the 8th and retired the two batters he faced on only three pitches.

Toronto’s #9 hitter Ryan Goins, who none thought of as a real offensive weapon, went 2 for 2 against Nova with a double and a home run.

Brett Gardner continued to struggle at the plate, going 0-3 at the plate and is now hitless in his last 20 at-bats.