After three-hour delay, Rangers rally off Yates to win 9-6

By Unknown - June 28, 2016
Unbelievable. In one of the craziest games in recent memory, the Yankees were hurt by a 3 hour, 35 minute rain delay as the Rangers rallied off Kirby Yates in the ninth to take Monday's series opener, 9-6. As the top of the ninth began, the rain began to fall harder and harder, and after Aroldis Chapman walked the leadoff batter and fell behind Shin-Soo Choo, Joe Girardi got his wish and convinced the umpires to delay the game. However, after the delay, Yates hit two batters, and then Adrian Beltre and Elvis Andrus both delivered 2-RBI singles to give Texas the win. 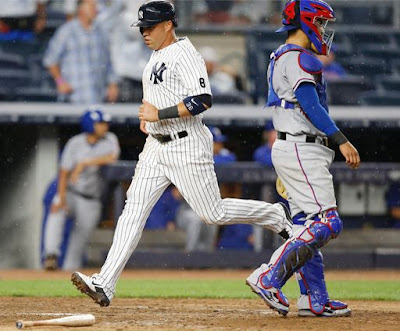 Before the rain delay, Ivan Nova struggled in five innings of work, giving up six hits, three walks, and four earned runs. The Rangers had plenty of opportunities to score, and got on the scoreboard first with an Ian Desmond solo homer in the first. Both teams combined to score in five straight half-innings as the lead flip-flopped between each team. In the bottom of the fifth, the Yankees started the half-inning down 4-3, but quickly turned it around. First, Brian McCann’s RBI single tied the game, and then with two outs, Didi Gregorius’s line-drive single to left gave the Yankees a 5-4 lead they would not relinquish.


In the bottom of the seventh, Mark Teixeira homered for the second time in as many days, via a screaming liner that just got over the wall in right field. 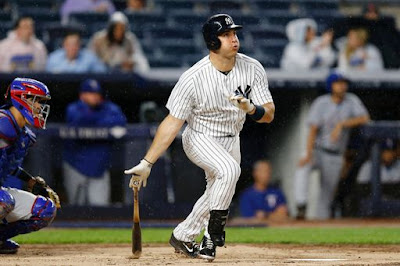 Richard Bleier and Dellin Betances pitched a scoreless sixth and seventh, respectively. Andrew Miller allowed a solo homer to Rougned Odor (legend) in the top of the 8th, which cut the Yankees lead to 6-5.