By Unknown - June 03, 2016
For the second straight night, Dellin Betances (2-3, 3.04 ERA) struggled on the mound. After he replaced Yates to start the seventh, Adam Jones and Hyun Soo Kim led off the seventh with consecutive singles. The next batter, Manny Machado, hit a slow roller down the third base line, and Jones easily scored from third as Machado was thrown out at first. The Orioles took the lead for good and won the series opener, 6-5. 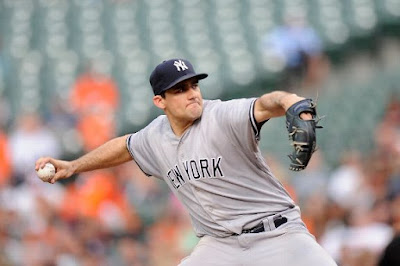 
The Orioles scored led 1-0 early in the second with Pedro Alvarez’s RBI single.

Carlos Beltran, who has been a big help on offense this year, put the Yankees on top 2-1 with a 2-run home run. A-Rod immediately followed him with a home run to right, going back-to-back with Beltran and the Yankees extended their lead to 3-1.

In the bottom of the 4th, Chris Davis hit his 11th home run of the season to bring the Orioles within one run, 3-2.

Austin Romine, filling in for Brian McCann who hyperextended his elbow, homered on the second pitch in the top of the fifth to regain the Yankees 2-run lead and make it 4-2. In the top of the sixth, after Didi Gregorius hit a ground-rule double to left center, Chase Headley singled to score Didi and the Yankees extended their lead to 5-2.

Baltimore rallied with three runs in the sixth. After Mark Trumbo singled to load the bases with one out, Matt Wieters singled to score Kim and Davis and brought the Orioles within one run again, 5-4. Kirby Yates replaced Eovaldi after the Wieters double. Yates, however, could not preserve the lead as Jonathan Schoop doubled off of Yates to tie the game at 5.

Mark Teixeira was injured in the 3rd inning and was replaced by Rob Refsnyder. He underwent an MRI on his right knee.